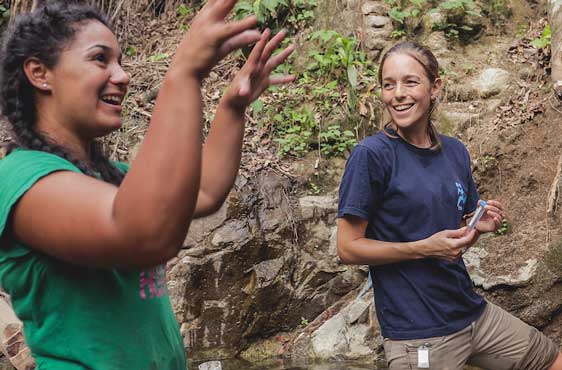 In October, a new gravitational sand water filtration system built by IsraAID and the Inter American University of Puerto Rico will be up and running in Barrio Real, a small rural community in Puerto Rico. (Courtesy of IsraAID)

Almost immediately after Hurricane Maria barreled into Puerto Rico a year ago this month, disaster relief groups rushed to the shattered island to help with rescue and cleanup.

The storm turned out to be the worst natural disaster ever recorded in the U.S. territory. The Category 4 hurricane caused catastrophic flooding that decimated 80 percent of the island’s crops, destroyed or damaged hundreds of thousands of homes and completely devastated the electricity grid.

As the recovery and rebuilding effort stretched into weeks and months, most emergency response groups packed up and moved onto other disaster zones.

But a year after the storm, IsraAID is still in Puerto Rico, and plans to stay for at least two more years.

“Following the earthquake in Haiti we stayed there for eight years,” said Yotam Polizer, IsraAID’s co-CEO. “Though being on the ground quickly saves lives, we’re realizing more and more that the initial emergency response doesn’t sustain the local population.”

Now, the group’s focus in Puerto Rico is helping communities still struggling with hurricane-related trauma and a dearth of clean drinking water. Needs are especially acute in rural villages cut off from the national water grid.

“There is still a lot of work to be done, especially in the mountainous areas,” said Haley Broder, IsraAID’s head of mission in Puerto Rico. “We’re working with a small community there that didn’t have electricity for more than eight months and whose clean drinking water is dependent on an electrical pump.”

Hurricane Maria is blamed for more than 3,000 deaths – not just those who died during the hurricane, but those who died from hurricane-caused illnesses and lack of treatment. Then there’s the additional collateral damage exacerbated by the storm, including deepening poverty and a spike in suicides. Perhaps most notably, tens of thousands of people left the U.S. territory and moved to the mainland. They may never return.

“Our psychologists say it’s not PTSD [post-traumatic stress disorder] because people are still experiencing trauma every day,” Broder said. “There is nothing ‘post’ about it.”

Since ending its emergency response, IsraAID staffers — supplemented by trained volunteers from San Juan’s Jewish community — have focused on programs that build resilience and foster self-sufficiency.

The group is working mostly in communities with high rates of elderly and low-income populations. Among the priorities: to create emergency operation plans to cope during the next crisis, whatever that may be. The plans include evacuation protocols, psychological first aid and access to drinking water.

IsraAID is also working with 65 teachers from ASPIRA, a network of schools throughout Puerto Rico to build a resiliency curriculum to reduce levels of stress and trauma during and after an emergency. The program will serve 3,400 children.

In October, a new gravitational sand water filtration system built by IsraAID and the Inter American University of Puerto Rico will be up and running in Barrio Real, one of the small rural communities where IsraAID went door to door delivering temporary household water filters right after the hurricane.

The new filtration system does not require electricity to function.

Volunteers from San Juan’s small Jewish community trained by IsraAID have taught residents of Barrio Real how to keep their new water system safe from water-borne diseases and pollutants.

The Jewish volunteers include members of the local Chabad, the Conservative Jewish Community Center of Puerto Rico-Shaarei Zedek Synagogue and the Reform Temple Beth Shalom.

“These are places that otherwise wouldn’t get much help,” Mandelbaum said.

The continuing presence of the Israeli humanitarian organization in Puerto Rico “is a great source of pride for the Jews of Puerto Rico,” he added.

Ari Berman, who served as an IsraAID Humanitarian Fellow in nearby Dominica after Maria destroyed much of the island, said he gained invaluable experience. The fellowship, whose main funder is the Charles and Lynn Schusterman Family Foundation – which is also one of many funders that support IsraAID missions – enables U.S. college students to work alongside IsraAID trauma, medical and water professionals in disaster zones around the world.

“Working in Dominica confirmed for me what good humanitarian aid looks like,” said Berman, a student at Harvard.

Hannah Gaventa, who served as IsraAID’s head of mission in Puerto Rico for most of this year and now leads its Dominica response team, helped formulate the organization’s long-term strategy in Puerto Rico. The emphasis, she said, was building sustainable programs that others could run even after IsraAID is no longer there.

A member of Schusterman’s ROI Community, which aims to support young Jewish leaders, Gaventa credited two ROI micro-grants – for a facilitation course and Spanish-language study — with helping give her the tools necessary to succeed at her job.

“At the facilitation course, I learned how to facilitate conversations and gatherings and meetings — you really want to bring out the voices of the people you’re working with,” she said. “In 2018, a micro-grant allowed me to take a Spanish learning course. Before the course I spoke just a few words of Spanish, and now I can work in the language.”

Sadly, humanitarian aid offered in the immediate wake of disasters often never reaches its intended target. In September, officials acknowledged that millions of water bottles dispatched to Puerto Rico after Hurricane Maria are still sitting, untouched, on the airport tarmac.

Food and donated clothing sent to Puerto Rico also ended up rotting in warehouses due to lack of coordination, according to Polizer. While most relief funding after disasters like Hurricane Maria go toward initial recovery, Polizer said long-term recovery needs are more critical – and typically not as well funded.

While IsraAID’s piece of the overall aid effort is relatively small, it’s carefully planned to avoid waste and maximize impact.

“The process takes time but it’s worth it,” Polizer said.

“As IsraAID’s goal for an affected area changes from direct relief to capacity building, we identify and work with local groups, religious groups, and local NGOs. The idea is to provide them with the tools they need to support themselves.”

Michelle Chobin, JTA. This article, sponsored by and produced in partnership with The Charles and Lynn Schusterman Family Foundation, is part of a series about how young Jews are transforming Jewish life in the 21st century. This article was produced by JTA’s native content team.