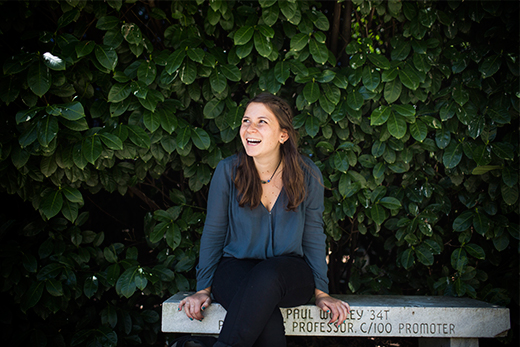 Federation and The Soille Hebrew Day School are very proud of Naomi Maisel - HDS Class of 2008 and Alumni of the Year for 2015 - has been honored by Emory University for her devotion to community and to addressing hunger.

To hear Naomi Maisel tell it, she’s just a laid-back California girl who wants to surf and hike.

But to the faculty, staff and classmates who know her best, she’s the energetic and driven student who built an organization that saves about 1,000 pounds of potentially wasted food every month, then converts it into healthy meals for those in need.

They also noticed Maisel remained a top student while finding time to serve as a research assistant on a food insecurity project at the CDC, work with Volunteer Emory on various efforts, and serve as an orientation leader for new students.

So while she remains in awe of the peers she says embody the “live hard, play hard” mantra she claims to lack, Maisel is this year's winner of the Lucius Lamar McMullan Award.

The McMullan Award, made possible by a generous gift from Emory alumnus William Matheson 47G, honors not just Maisel's exceptional leadership so far. It also telegraphs to the world that the Emory community expects great things from her in the future.

“I didn’t come to Emory thinking I’d get involved in Atlanta,” the San Diego native says. “My parents raised me to do good for others. And at Emory, you could see the wealth, and I found it was juxtaposed with the poverty right down the street.”