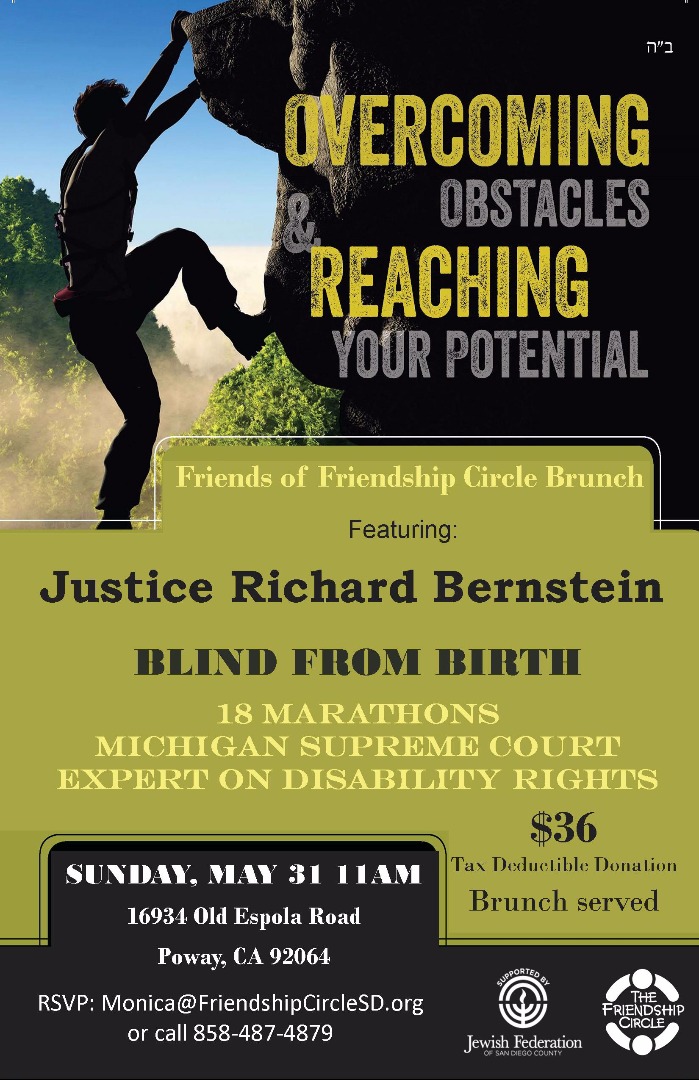 Justice Richard H. Bernstein will be speaking on May 31 at the Friendship Circle brunch to honor its donors and volunteers.  Justice Bernstein, who has been legally blind since birth, recently began an eight-year term as the first blind justice on the Michigan Supreme Court.  In this capacity, as has been the case throughout his career as an attorney, he is committed to promoting fairness and justice.

With a long and impressive list of credentials, including being a Phi Beta Kappa graduate of the University of Michigan and a juris doctor from Northwestern University School of Law, Justice Bernstein has distinguished himself by receiving the 2003-2004 Regeana Myrick Outstanding Young Lawyer Award for commitment to public service and he is the recipient of the 2008 John W. Cummiskey Pro Bono ward from the State Bar of Michigan in recognition of his leadership as an advocate and activist.  These are just a few of the honors bestowed upon Justice Bernstein in his career.  A complete list would be too lengthy to mention!

Before his election to the Michigan Supreme Court, [JB1] Attorney Bernstein’s cases often set national standards, protecting the rights and safety of people with disabilities.  When alterations to the stadium at the University of Michigan failed to accommodate disabled visitors, Bernstein partnered with the US Department of Justice to successfully represent the Paralyzed Veterans of America in an action that allowed for safe access for disabled individuals.  This case helped establish guidelines that are used by commercial facilities across the country.  In 2011, that same university presented Bernstein with the Neubacher award for his unwavering commitment to equal rights and opportunities for people with disabilities.

Illustrating that disabilities can be overcome on the road to success, Justice Bernstein has excelled throughout his legal career by memorizing lectures, notes and, ultimately, entire legal cases.  However, his achievements are not limited to the legal sphere.  He is an avid runner and has completed many marathons.  In 2011, he competed in the Half Ironman portion of the Israman international race event, held in Eilat, Israel.  In 2013 he was inducted into the National Jewish Sports Hall of Fame.  He previously co-hosted a one-hour radio show in Metro Detroit, called “Fighting for Justice”.  On April 26, 2013, Bernstein was awarded the Toastmaster Communication and Leadership Award by Toastmasters International for using his skills and experience to achieve his goals.

We look forward to Justice Bernstein’s appearance at the brunch which will take place at 11:00 at the Friendship Circle headquarters in Poway.  His riveting story is truly an inspiration for all!!