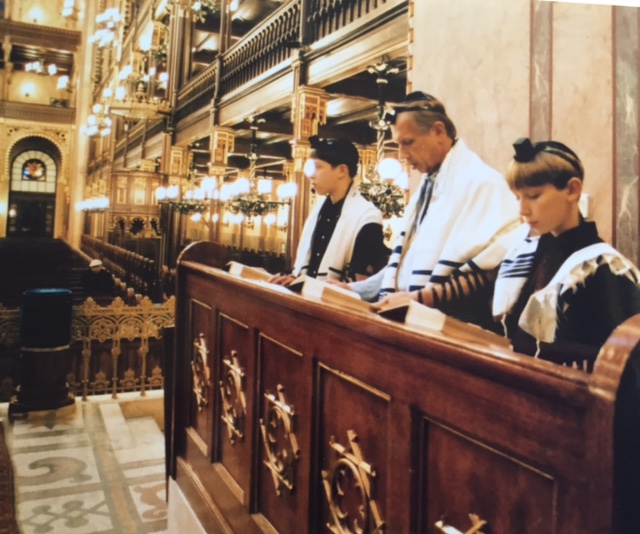 My name is Susanna Green. I was born and grew up in Hungary, but I have been living in the United States for decades.

Through JDC and my friends Carol and Ted Levy, I met Zsuzsa Fritz on my last visit to Budapest. She is the director of the Balint Haz JCC in Budapest and educational director of Szarvas, JDC and the Ronald S. Lauder Foundation’s flagship international Jewish summer camp. But mostly, for me, she is the heart and soul of Jewish life in Hungary.

Since learning about JDC’s work in Hungary today, I have contributed money to this cause. Inspired by the personal story of another donor, Cathi Luski, on this field blog, I also want to contribute my own personal story and why I believe that it is so important to have a place like the Balint JCC in Budapest today.

I came to the United States in 1984 as a tourist and met my husband in New York. He is Hungarian and lived in 4 countries, but never in Hungary​,​ because of changing borders.

My parents were Holocaust survivors. They had to create “new families” after World War II, because my father’s wife and four children, and my mother’s new husband, were killed in concentration camps.

We lived close to the Russian border in a very small, poor village, and I had an older sister and brother. It was very primitive living; there with no running water or plumbing in the houses, and dirty coal was our source of heat.

The best times were twice a year, when we received a package from JDC: in the fall, it was winter clothing, and before Passover, holiday supplies to help us celebrate.

My dear father died when I was six years old, in 1966. After that, we moved to Debrecen, the second-largest city in Hungary. Almost all of the Jews outside of Budapest were deported and killed during World War II. Even in Debrecen, there were less than 40 Jewish families. But we were lucky: an old Jewish teacher had survived.

She collected the Jewish kids together, maybe 18 of us in total, for the big holidays, and she would write plays that we performed. That’s how I was introduced to Judaism!

With the small amount of Jewish kids in town, it`s no surprise that intermarriage is prevalent, including in my family. My brother’s wife is not Jewish, and his family still lives in Debrecen. When their daughter was growing up, the wonderful teacher who introduced me to Judaism had died and there were even fewer Jewish children in the city. My niece learned about Judaism from my mother and the rest of my family. She’s interested in her Jewish roots but never went to camp at Szarvas or anything Jewish, formal or informal!

​She went to college and is now in graduate school in Budapest, but even there, she has only met a couple of kids with a similar background and has not developed a connection to Jewish life.

This is where the importance of the work of people like Zsuzsa Fritz comes in! It is critically important that there is a Jewish place with an open door and with programs that are interesting and even cool enough to be a place where kids, teenagers, and young adults want to go. This place can be their introduction to the Jewish community and life outside the home.

Budapest has the largest number of Jews in Eastern Europe, but only a minority are openly involved in Jewish life. Most people are scared to participate, because of the anti-Semitism in the country (and sadly, I’m afraid, throughout Europe, too). Under these circumstances and given our history, it seems much easier to hide your Jewish background.

I fear that people facing such hate, and concerns of the past, will not embrace their Jewish identity unless strong, attractive institutions exist in Hungary. That’s what makes Szarvas and the Balint JCC so important and why my husband and I are helping. In fact, I will visit Szarvas with JDC next month.

JDC’s work is incredibly valuable and it’s the only hope I see for rebuilding this community and reconnecting the wonderful young people to it.

The support of American Jews, at this crucial times are so needed and so greatly appreciated by those of us who understand well the realities – both the challenges and the opportunities – in Hungary right now.