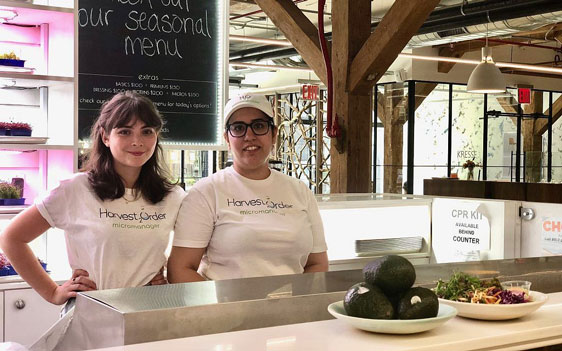 NEW YORK – When Le Cordon Bleu-educated cook Liz Vaknin worked in some of Manhattan’s most prestigious restaurant kitchens several years ago, she often had to fish inside a container of small green leaves and stems to garnish elaborate dishes.

Little did she know that the tiny shoots, also known as microgreens, would one day change her life.

“I was a steak and potatoes girl four days a week. I eat mostly microgreens now and I feel satisfied,” Vaknin tells The Times of Israel. “I think that says a lot.”

In early June, Vaknin and her business partner Shelley Golan, both Israeli-American New Yorkers who crossed paths studying at the IDC Herzliya some 10 years ago, opened the first ever microgreen salad bar in the United States. It takes the trendy “farm to table” concept to a whole new level.

Walking around the location, it is very clear that the area is a food-lover’s heaven: the Mast Brothers chocolate factory on one side; all-day breakfast spot Egg on the other; the popular Blue Bottle coffee shop around the corner; and many more small casual cafes on the way.

The stand itself is simple: a shiny white-tiled booth with a white counter and an iPad checkout. But the eye-catching attraction is on the back wall: seven shelves of potted plants with microgreens of different shapes and colors perfectly aligned and “tanning” under bands of pink and blue LED lights.

This intriguing vertical lab is not just a display: At Harvest2Order, the microgreens used in each salad are harvested on the spot, right in front of the customer’s eyes.

“It’s an experience, it’s not just getting the salad,” Vaknin says. “We brought the farm to the table. There is no bridging the gap anymore – this is the future of fast casual food. It’s the future of dining.”

Although the mini plants are admittedly adorable-looking, it isn’t just a gimmick. Microgreens, Vaknin and Golan explained, carry a long list of benefits that other greens and vegetables can’t compete with.

Microgreens are in fact the shoots of salad vegetables such as arugula, Swiss chard, mustard, beetroot, carrots and others picked just after the first leaves have developed and long before they become fully grown vegetables.

The main advantage of consuming microgreens is the nutritional value they provide: These small leaves can be 40 times more nutritious than their fully matured counterparts, the women claim.

“Every little green is going to be a full stem of kale, or a full carrot,” Golan says, picking up a small pot from the shelf behind her.

“These are all going to be carrots,” she continues, gathering a few stems between her thumb and index finger. “So this a bushel of carrots worth of nutrition.”

And here lies the secret of microgreens: If one tiny stem is a whole vegetable worth of nutrition, then eating only a small handful can boost one’s energy dramatically without a too-full feeling, say the women.

“I always say that microgreens are the Clark Kent of superfoods,” Golan tells the Times of Israel. “Because they are standing in plain sight. They are just vegetables – it’s a carrot, it’s a radish, it’s a broccoli, it’s all of those things. If you just harvest them earlier, they become a superfood. But they are nothing new.”

Along with the nutritional advantages, growing microgreens as opposed to full vegetables can make for a reduction of up to 98% less water and waste.

The microgreens that Vaknin and Golan are using at Harvest2Order are grown hydroponically. Without soil, they are planted in a sterile white substrate made of wood pulp that is pumped in liquid form into the small trays and then drenched in nutrient-dense water.

“So that creates a base for the roots of the plant to anchor into the substrate and then the nutrient dense water feeds the roots,” Golan explains, holding a pot in her hand. “These are grown in the most efficient way which is using a combination of natural sunlight and also LEDs. It is the most energy efficient way to grow things.”

“If you go to a farm in Long Island or out somewhere rural, there are a lot of fields. So they are growing bigger vegetables and fruits and things like that,” Vaknin says. “A lot of the work with microgreens is being done with urban farmers. It’s a small crop. They grow quickly, are suitable for indoor vertical farming, and probably do better in indoor vertical than traditional agricultural practices.”

Surprisingly, not only are these greens packed with nutrients, they are also packed with flavor.

“Here, try the tangerine microgreen,” Vaknin says, as Golan picks a single stem and hands it over.

The thin light green leaf does not go unnoticed by one’s palate. It provides an instant burst of citrus flavor, much like biting into an orange.

“If I harvested you a bowl of arugula microgreens and you tried to eat it, your mouth would be on fire in three seconds,” Vaknin says. “Because arugula tastes like pepper, it’s very strong.”

There are currently two toasted sandwiches and four salads on the Harvest2Order menu. Each contain a generous amount of decadent seasonal toppings, ranging from crunchy colorful watermelon radishes to fried cauliflower florets seasoned with a homemade “everything bagel” mix. There are also proteins, such as herb roasted chicken, and dressings change seasonally. Salads range from $10 to $14, including protein, and the sandwiches are $14.

Many of the toppings are clearly inspired by tastes found in Israel.

The pair have other innovations in store for salad eaters. “We don’t toss our salads here,” Vaknin says. “It’s not like every other salad – you don’t need to chop it, you don’t need to toss it, because the surface area ratio for these microgreens is a lot smaller, so if you drizzle the dressing, it gets in everything.”

If microgreens are such a revolutionary food, the question remains: Why don’t we hear about them more often, and why can’t we order them at any other salad joint?

According to the Harvest2Order duo, chefs have been aware of microgreens at least since the 1990s and have been using them in restaurants. But still, the mainstream consumer has been kept in the dark.

Golan and Vaknin came across the superfood about two years ago, while running their five-year-old sustainable food branding company, Our Name is Farm. They started working with a New York City-based agriculture collective and started getting more exposure to urban-grown products.

“That’s kind of where we found out about microgreens, not just as this frivolous garnish that I would use when I was working at Bouley, but as a source of real sustenance, the main player in a meal,” Vaknin says.

Quickly enough, the two developed what they describe as an addiction to microgreens and became frustrated when they couldn’t find them at any place that serves salad.

“Basically I think that the reason why it hasn’t been done on a mass scale so far is because it’s very inaccessible price-wise,” Vaknin says. “The reason for that is because supply needs to meet demand. There is no demand, so there is no supply.”

The little supply that exists, she adds, is highly sought after because “the few people that know about it are addicted. They want a lot and they are willing to pay.”

“If you go to Whole Foods right now, two blocks away, you can get them. They are grown in Bushwick, they are great, they are delicious, but they are also $6 for a portion,” Vaknin goes on. “So it’s kind of hard to justify that when you are shopping for home and you can get a big thing of local greens that will feed you for a few meals and that’s $4.”

A wave of interest?

In the 16 months since Vaknin and Golan have begun working on their innovative concept, more companies have begun using microgreens and are giving them a place in the spotlight.

In a city where the wellness trend has boomed over the past few years, it seems only logical that microgreens are the next step.

“For me, microgreens are following the same trajectory that truffles are following,” Vakin adds. “There was a time when truffles were considered this elite product that you couldn’t touch, that weren’t in home kitchens, that nobody knew how to use, and today, everybody and their sister is using truffle oil, truffle salt, you name it.”

Still one main difference remains, Golan points out: Truffles are still a luxury product and microgreens are not.

“They are just vegetables,” she said. “They have been marketed as a luxury product and our angle is that it should be a product for the mainstream consumer and demand should be built so that it could be readily available.”

When asked about their partnership, Golan and Vaknin do not hesitate to call it a “marriage.”

“We have a written contract that is recognized by the government, and as anyone who is married will tell you – marriages are a lot of work,” Golan says.

“Till death do us part. Literally, in this industry,” Vaknin adds. With their new endeavor, it is safe to say that the two diminutive women in their late 20s are becoming a true power couple.

“A lot of times people can underestimate us because we are these small women, we look young,” Golan tells The Times of Israel. “But one of the reasons we have been successful is because we keep on overturning people’s expectations and exceeding them.”

“The fact that our parents are both Israeli-Moroccan helps a lot,” Vaknin also points out. “I don’t really need to explain to Shelley why I have to go to Shabbat dinner every Friday. She knows. She comes from that environment, she understands.”

Together, they hope to engage an audience and raise awareness of the benefits of microgreens in order to build demand from the ground up. The dream, they said, is to someday have their own urban farm.

When lunchtime rings in at the North 3rd Street Market, the first customers of the day walk up to the booth, appearing intrigued.

“Would you like to know what’s going on?” Golan asks.

As one woman orders her salad, Vaknin turns to the illuminated shelf and grabs a pot of reddish microgreens, which she cuts with scissors above a cardboard box. Slowly, she drops in the various colorful toppings, scooping them out of metal containers in front of her.

“Here you go,” she smiles, sliding the box with its clear plastic lid across the counter. “Enjoy.”

by Danielle Ziri, Times of Israel