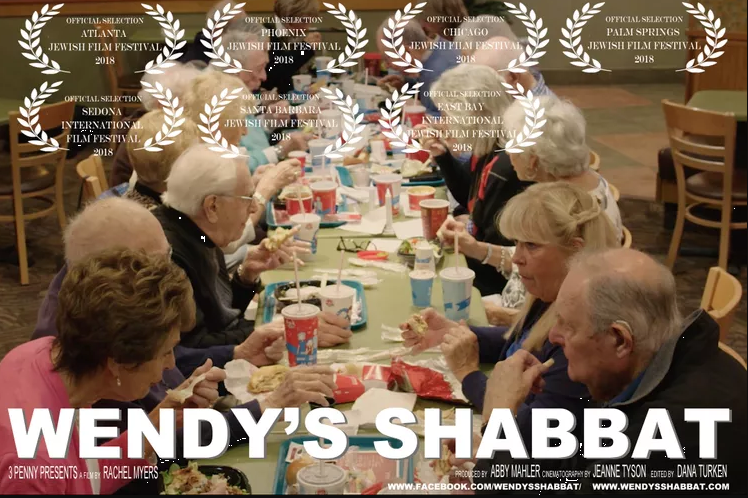 For most of the last decade, a group of G-d’s chosen Golden Oldies have gathered to celebrate the day of rest at a Wendy’s in Palm Desert, California. The number of regular attendees is somewhere between 18 and 28, according to Rachel Myers, director of a new short documentary about the group, the appropriately titled Wendy’s Shabbat. Among the group is Myers’ grandmother, Roberta Mahler, who also happens to be the star of the movie (to complete the family affair, Myers’ mother, Abby Mahler, is the executive producer).

Myers, a director and production designer based in Los Angeles, first heard of the weekly ritual from her grandmother a few years back. “I just thought it was the most hilarious thing,” she said. But she understood that for Jews of a certain age, the appeal of “social engagements without the clean-up and cooking and cost” is too much to pass up. To back her up, one of the movie’s more memorable characters, Rabbi Isaiah Zeldin, 97, marvels at the affordability of the Wendy’s menu (Zeldin, a legendary Reform rabbi, recently passed away).

Years later, she mentioned her grandmother’s fryer oil-soaked Shabbos to a friend, Juliana Schatz, who encouraged her to pursue the idea as a film (Schatz, a director herself, ended up as a producer on Wendy’s Shabbat). Armed with a list of questions and only a vague idea of what the movie was going to be about, Myers and her crew descended on Palm Desert.

Originally, Myers said, she was hoping to find something simple, a “strong nugget of, like, this deep Jewish connection” that would be easily communicable on screen. But what she ended up finding in interviews with her grandmother and the other Wendy’s Shabbat-goers was much more than she had bargained for.

In just ten minutes that feel all too short, Roberta Mahler and her friends describe the difficulty of trying to keep their heads after 80. Though they’re all attached at the hip to their dogs, many of them struggle to find real connection once their old friends and spouses pass away. And the prospect of new love or friendship becomes far more daunting when you’re not sure how long you’ll have with them. So how to keep yourself sane?

It’s ritual. Though it’s not said explicitly until later, Roberta’s insistence on making her bed each morning to keep herself feeling normal seems a direct connection to everyone’s agreement on the importance of ritual to their sense of community among other Jews. That’s not strict adherence to the rules, mind you—Lou Silberman, another stand-out, cops to ordering a Son of Baconator at these shindigs—but ritual, routine, order not for the sake of order, but as a weekly reminder that they belong to something.

Wendy’s Shabbat has premiered at a handful of Jewish film festivals and will be making its first appearance at a non-Jewish film festival in Sedona this month. Though even this success was unexpected, Myers sees why the film seems to have touched a nerve with so many people; the universality of our questions about aging and having to actually be aged, she said, transcend any cultural and ethnic boundaries. In addition to that, the “gesture of ritual has opened something for people who see the endurance of community into old age,” Myers said.

And you can partake in the ritual, too, with an exclusive clip from this heart-warming film (click on the above image to view now).

By Jesse Bernstein for Tablet