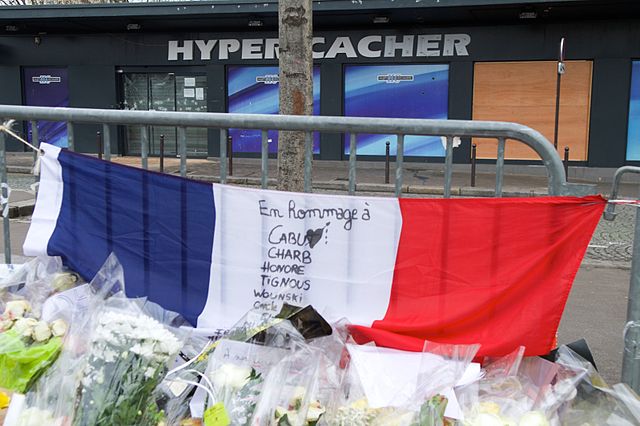 Federation recently hosted both Michael Novick of the Joint Distribution Committee (JDC) and Danyelle Neuman of the Jewish Agency for Israel (JAFI) to discuss the ongoing work of both organizations in Israel and around the world. Both guests had a lot to say on the current situation of Jews in France where anti-Semitism is on the rise, making the region increasingly unsafe for Jews to live out in the open.

Both agencies and Federation are committed to not only helping those Jews which seek to flee France but also for those wishing to stay in their home country.

To better understand the current situation in France, Jonathan Greenblatt, CEO and National Director of the Anti-Defamation League and Roger Cukierman, President of CRIF, the Representative Council of Jewish Institutions in France, wrote this piece:

One year ago this week, an ISIS-affiliated Islamic extremist murdered four Jews at the Hyper Cacher kosher supermarket in Paris. That attack followed the shootings of the Charlie Hebdo journalists and police officers just two days earlier, a heinous act also committed by ISIS trained terrorists.

In 2012, a terrorist, who claimed affiliation with al-Qaeda, killed three soldiers in Montauban and days later murdered a rabbi and three children at a Jewish school in Toulouse. According to leaked documents in the ongoing investigation of the massive November 13 attacks in Paris, Jewish targets also were considered by the ISIS-affiliated terrorists.

Anti-Semitism is a core tenet of Islamic extremism, so it should not come as a surprise that French Jews are attacked in tandem with representatives and symbols of the French Republic: soldiers, police, and those exercising freedom of the press. For too many years, though, the wave of anti-Semitism that began in 2000 was considered by French public opinion and French authorities as simply the import of the Arab-Israeli conflict and thus not the responsibility of France.

The Hyper Cacher murders marked a turning point toward an understanding that the French Jewish community and the French Republic share more than common enemies. They share a common destiny.

In a major speech to the French parliament just days after the attack, Prime Minister Manuel Valls admitted that French society had let down its Jewish compatriots by not reacting sufficiently. He vowed to implement a multi-pronged strategy against anti-Semitism and against radicalization in the Muslim community. That work is underway.

French authorities waged a similar battle against radicalization and anti-Semitism a century ago among mostly rural Christian communities. Public policies were implemented to emphasize critical thinking and secularism in educational institutions. Those efforts should be reinforced to address Islamic extremism in schools today.

In 2015, almost 1,000 students were identified by their teachers as at risk of radicalization. In some schools in France -- fortunately a minority of them -- the anti-Semitism of the past 15 years presaged a rise of other illiberal tendencies: homophobia, sexism, conspiracy theories, and hatred of the French Republic.

Increasing Islamic extremism has contributed to the political gains of the far right, which also has a long history of anti-Semitism. The mutual reinforcement of these movements -- with the far right contributing to radicalization among French Muslims -- is not good for the Jews nor does it augur well for democratic values.

Today the situation in France is grave and very different from the conditions familiar to Jews living in the U.S. Comparing eight years of ADL's records for anti-Semitic assaults in the U.S. and data from SPCJ, the French Jewish security agency, we see that French Jews are nearly 40 times more at risk of being attacked than American Jews (after adjusting for the size of the two communities). While it is illegal in France to keep statistics based on ethnicity or religion, strong anecdotal evidence suggests that the overwhelming majority of the assailants are young men of North African descent.

According to a 2013 survey of European Jewish communities by the European Union, sixty percent of French Jews feared being the victim of an anti-Semitic assault. Half of French Jews always or usually avoid wearing anything that will identify them as Jewish. Fearing for their physical safety, a growing number of French Jews simply have left their native country. The number of French Jews who moved to Israel doubled in 2014 from the prior year to more than 7,000, and reached almost 8,000 in 2015. While no hard statistics are available, Jews also emigrated in large numbers to the UK, the US, and Canada. Moreover, most of these are core members of the community: families with children, identified Jews committed to their faith, people who feel that they have been forced to choose between their beliefs and their safety.

If the majority of French Jews lose confidence that their situation will improve, those numbers will continue to grow, leaving Europe's largest Jewish community much diminished and on the brink of collapse.

Our analysis and other polls have shown the French Muslim community to be one of the most moderate Muslim communities in Europe, but the terrorists who emerged from it have already deeply affected the Jewish community. Will Islamic extremists, with their intrinsic anti-Semitism, radicalize enough French Muslims to cause half a million French Jews to flee? Or, will the enduring French values of equality and fraternity prevail among the French Muslim community of eight million as an antidote to radicalism? Indeed, let us not forget, it was a young Muslim employee, Lassana Bathily, who saved six Jews at the Hyper Cacher market by hiding them in a walk-in freezer, an act which could have cost him his life

We all have roles to play. The government must ensure security for all French citizens, allow Jews to live openly as Jews, educate the public against anti-Semitism, and combat radicalization through a variety of means including better integration of French Muslims into French society. French Muslim leaders must encourage their communities to assist the authorities to identify those at risk of radicalization or already radicalized. Political parties committed to the values of the French Republic must prevail over parties who oppose those core ideas. Jewish leaders in France and around the world must continue to raise the alarm and make clear what is at stake: as goes the fight against anti-Semitism, so goes the French Republic.

In the words of President François Hollande, "it is not the Jews who should be leaving France, but the anti-Semites," and of Prime Minister Valls: because if French Jews leave, "France will no longer be France."

Jonathan Greenblatt is CEO and National Director of the Anti-Defamation League. Roger Cukierman is President of CRIF, the Representative Council of Jewish Institutions in France.

This article originally appeared on The World Post on January 9, 2016 and is republished here with permission.