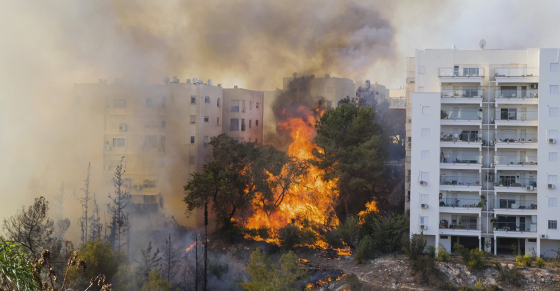 Our Israel team reports it’s pouring outside!  This is welcome news, as it’s the first major rain of the year, following a very long dry spell. It also brings a sense of security to those in areas damaged by the catastrophic fires that burned through the country over the last week.

The San Diego community has so far raised $26,000 from more than 100 gifts. Federations around North America are working tirelessly to raise funds to help those in this time of desperate need. This collaborative effort speaks volumes to the will and determination of the Jewish people.

We thank you for your generosity and support.

For more on what is happening in Israel currently, please watch and share the video below.

Over the last two days, as clean-up efforts continue, discussions have focused on who foots the bill for repairing all the damage.  Under Israeli law, the state is obliged to compensate citizens for damages that were caused by “hostile acts,” including terrorism (payments are made from a specially designated fund held by the government). Conversely, most private insurance policies exclude “hostile acts” from their coverage.  Determining what caused each of the hundreds of separate fires in order to figure out whether insurance companies or the government will need to pay has been the top concern for those whose homes were damaged and had private coverage.  That’s because the government’s fund is intended to fully cover structural damage, but has a low cap on damages to the content of the home (approximately $40,000).  In many cases, this figure is lower than the insured amount.

It was for this reason that yesterday’s announcement by Israel’s Finance Minister Moshe Kahlon that insurance companies have agreed to make an exception and issue payments to cover this gap to their existing customers was greeted with such relief and enthusiasm. “The willingness of the insurance companies to help and their level of sensitivity are deserving of respect,” Kahlon stated.

Times of crisis often bring out the best in people. Israel is awash with stories of kindness: strangers taking in families, heroic firefighters going above and beyond, and donations of clothing, household items and more for those who have lost everything.

Last Friday night, the entire religious community of Halamish – more than 1500 people – were forced to evacuate as fires surrounded their town. Those who could get to their vehicles picked up others, piling 7-8 people in every car. Many had never driven on Shabbat in their whole lives. Within minutes, residents had knocked on every door, helped every person with difficulties and evacuated the town completely. At 11pm everyone drove to Ofarim, another nearby small town, where local residents opened their doors. Every single person from Halamish was taken in by Ofarim families, and many later described it – surprisingly - as “the most beautiful Shabbat of their lives.” Hosts made prepared food for their Shabbat lunches “stretch” as they shared meals with additional families that they had never before met. That day, on Halamish, was supposed to be the barmitzvah of one young resident. Instead, the 13-year-old read the weekly portion in the Ofarim synagogue, surrounded by his entire evacuated town, as well as all of the residents of Ofarim. Attendees say that there wasn’t a single dry eye in the room. Sadly, when news came through at the conclusion of Shabbat, Halamish residents learned that 15 houses had been burnt to the ground, and a further 25 were unlivable. Despite this, the only real thought that residents were expressing over and again was, “Thank God that nobody was hurt.”

And stories of kind neighbors and citizens came from every corner of Israeli society. Following the collapse of the roof at a Conservative synagogue in Haifa, an Arab contractor turned up to make the repairs, and refused to accept any payment from the synagogue. Another Arab man in Haifa, the owner of a take-out restaurant, showed up at firehouses and distributed free meals to the firefighters.  Countless other reports about Arab citizens helping their Jewish neighbors are only now coming to light.

Of course support and solidarity from America, and from our Federations, has been flowing in as well. Yesterday, Combined Jewish Philanthropies (CJP) of Boston’s president, Barry Shrage, visited Haifa. Together with Jewish Agency chair Natan Sharansky, they began distributing aid, including $1000 each to families whose homes had been rendered unlivable by the fires. So far, the Jewish Agency’s special fund – supported by Federations- has already received applications from 260 families, and has distributed 150 checks. But their work isn’t finished – and help is needed to complete this effort and bring further relief to those whose lives have been forever changed as a result of the fires.

Rain, in Israel, is sometimes referred to as “gishmei bracha” or “rains of blessing.” As these new blessings fall on the country, we can reflect on a frightening and emotional week. In the end, widespread damage, financial hardship and the specter of terrorism visited Israel in a terrifying way. Yet at the same time, the fires brought out the very best in people – with firefighting planes arriving from 10 countries, and gestures of kindness by all the people of Israel, and Jews around the world. I am proud and inspired by so many of the stories I am hearing. And above-all I am thankful that our ongoing emergency preparedness work positioned Federations to respond effectively and quickly when our help was needed.

Yesterday was Rosh Chodesh, the first day of Kislev, a month when we celebrate the miracle of Hanukah and a time when the Jewish People were able to see light in the darkness. Let us all remember that during the darkness of the last week, an incredible, fiery light shone brightly as well.