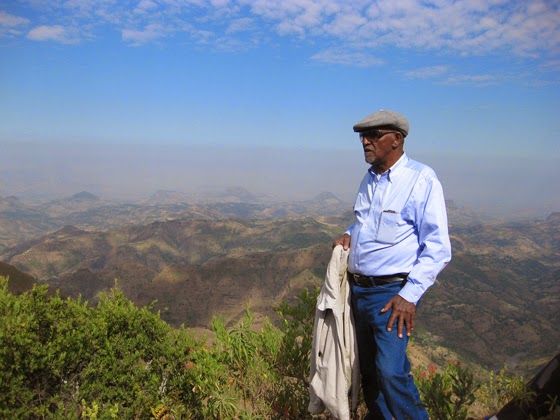 In the winter of 2013, several members of our San Diego Jewish community went on an American Jewish Joint Distribution Committee (JDC) humanitarian mission to Ethiopia. The aim of the mission was to provide clean water and to build schools for four remote villages in the Gondar Region. The mission also provided scholarships for eight Ethiopian women to attend nursing school to become mid-wives so that they could eventually return to their home villages to provide much needed medical assistance. The members of the San Diego delegation were: Ashley Stone, Gloria Stone, Laurayne Ratner, Laura Galinson, Charlene Seidle, Karen Paterson, and Jane Fantel accompanied by two teenagers – Hannah Fantel-Galinson and Zakai Stone.

Members of the San Diego delegation had the honor of interacting with a remarkable man, the late Zimna Birhani z”l. Zimna was the group’s tour guide for the first few days of their mission. On the tour, Zimna passionately retold his personal story about the exodus of thousands of Ethiopian Jews to the land of Israel.

Between 1955 and 1965, approximately 27 Jewish Ethiopian teenagers, known as the “Kfar Batya” group, were brought to Israel where they were trained by the Jewish Agency of Israel (JAFI) to become emissaries for Israel. Once group members were trained, they returned to their villages as highly qualified and skilled teachers. One of these amazing teens was Zimna Birhani.

Zimna’s name isn’t well known, but in 1955, at the young age of 13, Israel’s Secret Service brought him to Israel. At the age of 18, he returned to Ethiopia and worked to help organize, educate, and guide Ethiopian Jews to safety in Israel. He played significant roles in Operation Moses and Operation Solomon and was also the Jewish Agency for Israel’s Ethiopian emissary for several years. In more ways than one, Zimna served as and represented the voice of Ethiopian Jewry to Israel.

Zimna was recently honored in Israel for his service to the Jewish people. He was recognized for his unrelenting courage, selflessness, daring nature, and veracity. Heads of Israeli organizations came to pay tribute to Zimna for his heroic and boundless deeds. Sadly, Zimna passed away from cancer on February 21st.

In his remembrance we reflect on the countless Ethiopian lives that he saved while working to secure their safe arrival to Eretz Israel.

May his memory be a blessing.