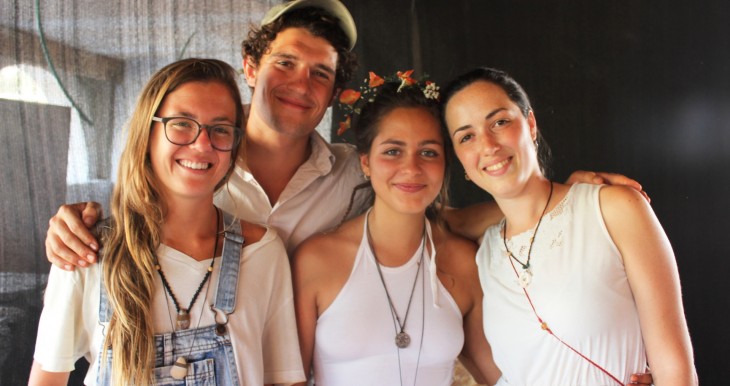 By supporting Federation you enable us to fund programs run by our partner, The Jewish Agency for Israel. You help make programs like this possible. Thank you for all that you do.

The Masa Israel project aims to encourage people toward economic responsibility, independence and health by increasing food availability and the communal sharing of products.

Anna arrived at an ulpan (Hebrew immersion school) in Mishmar Haemek to learn Hebrew and at the end of the course she joined Masa’s ‘Adam and Eve Farm’. There, she joined a group of young peers who are making every effort to develop the concept of a communal cooperative whose goal is to grow and develop food that can be enjoyed by everyone. Due to the increase in people facing hunger all over the world it can be a solution that will help many. In Israel their efforts are called “Forests That Feed" through which they hope to reduce the lack of nutritional security experienced by many around the world.

Anna Tibi is participating in the Masa program for 5 months of studying, working and experiencing community life. As part of a "personal message" She and her fellow participants in the "Eco-Israel" project are titling their work Food Is Free.

At the Ecological Farm in Modi’in

Food Is Free is the project of a nonprofit organization that started operating in the US in 2012 and has gained momentum since its inception. The organization aims to encourage people toward economic responsibility, independence and health by increasing food availability and the communal sharing of products.

"I came to the ‘Adam and Eve Farm’, after I finished my ulpan studies at Kibbutz Mishmar Haemek, as part of "Eco-Israel" through which each participant works on a personal project that will help improve the world,” she says. “I choose to join the Food Is Free initiative to try and encourage the residents of Modi’in to grow together their food, vegetables and fruits, to establish community gardens, and share the bounty generated when the work together.”

"I'm learning a lot at the ‘Adam and Eve Farm’, and have thoroughly enjoyed the various projects, and I know you can grow vegetables anywhere in Israel, even though there is a water problem in Israel,” Anna continues. “But as part of the program we’re also learning about water management.”

She is from Dijon, a city in central France, part of the Bourgogne-Franche-Comté region, 185 miles from Paris and 125 miles from Geneva and Lyon. In the more fertile agricultural areas "I know for sure it is easier to grow crops here and people want to share it my job is to help promote that,” Anna says.

She plans to move to Israel at the end of her Eco-Israel experience. 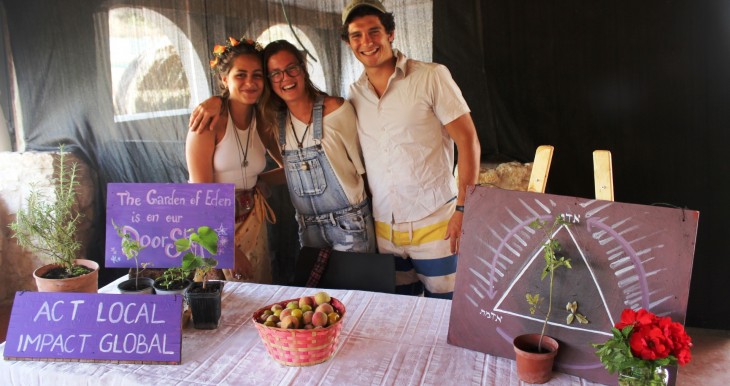 Camilla Greenstein, a Brazilian member of the project, sees the venture not only as a community garden but mainly as an invitation for the community to meet together in a positive manner while using cheap and varies species of crops.

"The garden is an invitation for the community to come and grow together, at home, and it really began when the US project initiator, John Edwards, kick-started the project,” Camilla says. “Today this is a global movement that leads to communities sharing a greater abundance of food products with many other communities around the world. Why shouldn’t the people of Modi’in be a part of that?”

Jonah Goldman, a Masa participant from Denver, Colorado, has an answer to Camilla’s question.

He points out a tire being used in an herb garden as an example of recycled materials helping the crops of the joint community.

"I look at this project and I live it and I think that participation here - at the farm - this is the best decision I’ve made since my graduation in the United States,” Jonah says.

Jonah, Camilla and Anna see the project as a way to solve real world nutritional problems, particularly in Israel, with the knowledge that in Israel there is always the possibility of nutritional insecurity and fear of food shortages.