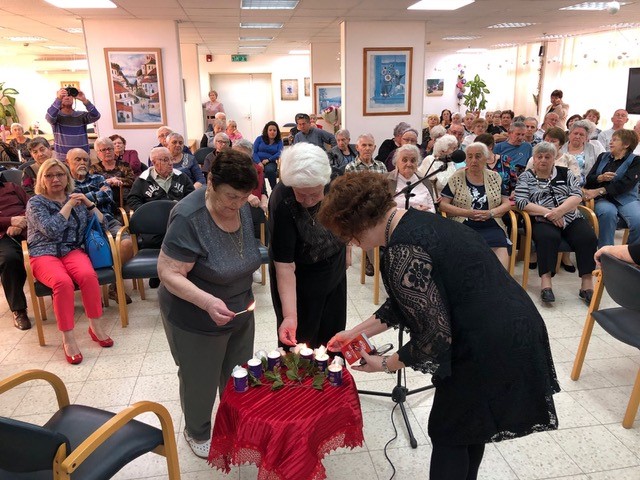 JERUSALEM, ISRAEL – Thousands of elderly residents of sheltered housing facilities run by Amigour, a subsidiary of The Jewish Agency for Israel, are holding Holocaust remembrance ceremonies across Israel this morning, during which they will hear testimonies from fellow residents who survived the Holocaust. The events are being held on Yom HaShoah, Holocaust Remembrance Day, as part of the Zikaron BaSalon (“Memories in the Living Room”) initiative. Family members and local government representatives are participating as well.

88-year-old Sima Paczyński, a resident of Amigour’s residential facility in Kiryat Binyamin near Haifa, shared her personal story with seventy fellow residents and their family members. Sima was 11 during the war and related her painful memories for the first time: “I will never forget how my mother and I dug a small grave in the ice for my newborn brother who froze to death. It is a great victory for me to be sitting here today, surrounded by family and friends, and sharing the story of my personal triumph over the Nazis.”

Amigour is a Jewish Agency subsidiary that operates 57 sheltered housing facilities for senior citizens across Israel, providing homes to some 7,000 elderly Israelis, the majority of whom are Holocaust survivors. Amigour board chairman, Arieh Abir noted that The Jewish Agency and Amigour view caring for Holocaust survivors as a great privilege and work around the year to promote housing and welfare solutions for them while bearing in mind their unique life stories.

The Jewish Agency and the Ministry of Construction and Housing recently launched an unprecedented initiative to build some 2,650 apartments for elderly Israelis, including many Holocaust survivors, via Amigour. Over the past decade, Amigour has recorded the life stories of over 1,000 residents who survived the Holocaust, fought as partisans, or served in the Allied forces during the Second World War and submitted them to Yad Vashem, along with some 3,000 pages of testimony.

Story by The Jewish Agency for Israel