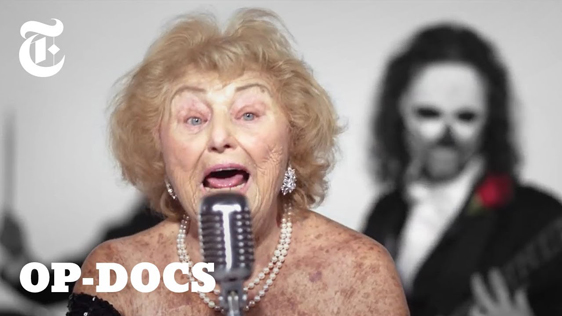 I first met Inge Ginsberg, the 96-year-old who’s recently become something of a death metal music icon, on a sunny August afternoon at her home two hours upstate from New York City. I’d half expected to see a place filled with Metallica paraphernalia, but it was nothing like that. Instead it felt as if I was visiting my grandmother’s house, having tea at a table with lox and cream cheese laid out.

I found her story remarkable. Growing up in Austria, on the eve of World War II, Ms. Ginsberg fled the Holocaust and landed in a refugee camp in Switzerland. After the war she and her husband, Otto Kollmann, moved to Hollywood and built new lives, composing for some of the most popular singers of their generation, including Nat King Cole, Doris Day and Dean Martin.

As Ms. Ginsberg grew older, she kept writing lyrics and poetry, and realized she needed to find new ways to reach an audience. How was she going to gain attention in a society where older women are neglected, silenced and often cast off?

At age 93, she discovered a solution: death metal, where you can shout your lyrics instead of sing them. It offered a new opportunity for reinvention at an age where those chances can be elusive. So beyond the spectacle of her unlikely performances, Ms. Ginsberg’s story is really that of a woman who is finding new ways to be heard.

Stories like Ms. Ginsberg’s are deeply important to me. My Jewish grandparents escaped Nazi Europe, but died before I was old enough to appreciate the stories of what they experienced. And the benefits of cross-generational relationships work both ways: Just as I learned so much from “Death Metal Grandma,” I know Ms. Ginsberg was energized by our team. Women like her have so much to teach us and are asking for our attention. It’s up to us to listen.

Leah Galant is a New York-based documentary filmmaker and was a recent Sundance Ignite and Jacob Burns Film Center fellow with the Creative Culture Program. This film premiered at the SXSW Film Festival.