THE SITUATION
Iran-backed Hamas terrorists in Gaza fired 120 rockets at Israel, yesterday. The IDF deployed the Iron Dome missile defense system to knock out the three barrages that were headed towards Israel’s cities. The system successfully intercepted the one rocket that could have hit heavy populated areas.  In total, 2,493 rockets have been fired at Israel since the current crisis began.
To date, 56 Israeli soldiers have been killed and 176 have been wounded. Former president Shimon Peres met with wounded soldiers yesterday and told them, "You did a job no army has done before… There are no winners in this war, only rescuers and you saved the country."
Calls have come from some members of Israel’s Knesset to call Operation Protective Edge a ‘war’. The designation of “war” will ensure additional compensation to the harshly-hit businesses of the south which have had to all but close down.
Despite the humanitarian ceasefire window from 3 to 7 pm yesterday, Hamas continued to fire rockets against Israel during this time.

ISRAEL DEFENSE FORCES
The IDF is set to call up an additional 16,000 reservists today to give the military some breathing room, bringing the total number of reserve soldiers called up so far to 86,000. That is the proportional equivalent of over 3 million U.S. forces called up for service. 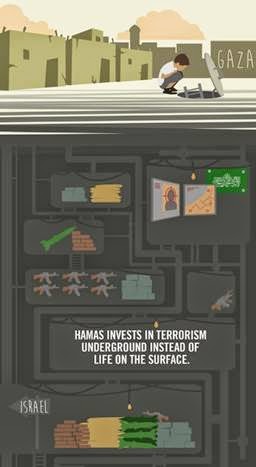 In what is now considered a ‘quiet night,’ three rockets hit Israel, landing in open areas and one Grad rocket was fired at Beer Sheva, also landing in an open area.
This IDF video shows a tunnel shaft in the basement of a mosque in Gaza. The tunnel is right next to the prayer room and leads to another network of tunnels.
Three Israeli soldiers were killed Wednesday night in a booby-trapped UNRWA health clinic. The UN building also contained an entry to a terror tunnel. Below is a picture of an UNRWA bag used to hide evidence of tunneling.
The IDF made 140 strikes against Hamas terror targets yesterday, totaling 3,652 strikes throughout the operation. Two days ago a Gaza power plant was struck. Brig. Gen. Yaron Rosen, Commander of IAF Air Support and Helicopter Air Division, said it was possible the plant had been hit by Israel by mistake, “The State of Israel did not attack Gaza’s power plant. It has no interest (in that). We transfer to them the electricity, we transfer in the gas, we transfer in the food in order to prevent a humanitarian disaster.”
The IDF reports that 1,129 Gazans have died in the past 24 days of this conflict. Tragically, Hamas continues to use civilians as human shields.
FOR MORE INFORMATION
http://www.jpost.com/Operation-Protective-Edge/Comptroller-sounded-alarm-on-Gazan-terror-tunnels-in-2007-369497