From The Times of Israel 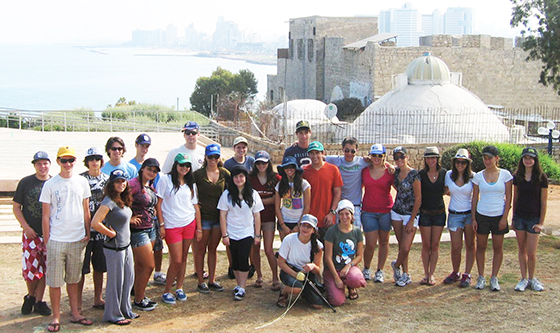 All too frequently news in Israel is unsettling and things sometimes seem as if they might spin out of control. So when I hear about something positive, I want to jump up and shout about it.

My youngest daughter had an experience this summer that made me feel that way. I realized this after we
exchanged text messages several weeks ago. She wrote, “We’re starting to head home from Jerusalem. :( .” I texted back, “What’s the sad face for? Wasn’t the tiyul (trip) good? Didn’t you have a good time?” She replied, “It’s sad to say goodbye to everyone.”

Let me go back to the beginning. Last year my daughter and some of her classmates at Nahariya’s Multidisciplinary Science and Art High School participated in a young leadership and dialogue program sponsored by the Gary and Jerri-Ann Jacobs International Teen Leadership Institute (JITLI). Similarly, students from the northern Druze village of Kisra-Sumei took part in a parallel program at their high school. During the year the two groups met, and, as a culmination of the program, teens from both schools which are part of the Amal Educational Network (Amal), spent four days together on a tour in Jerusalem. Yaacov Schneider, JITLI’s Director, explained that the Nahariya / Kisra-Sumei group was a pilot program with Amal. The goal is to expand the program to include five pairs of neighboring Amal schools, with youth from different cultures, from all over Israel this year.

JITLI has been sponsoring programs and trips like this in Israel for high school students of different backgrounds since it was established in 2000 with the support of the Jewish Federation of San Diego County. The Nahariya/Kisra-Sumei group spent part of the time during the Jerusalem trip with their teen counterparts on another JITLI trip made up of Jewish and Bedouin Israelis from Israel’s South and Jewish Americans from San Diego. Despite many differences between the groups, the teenagers found similarities that immediately enabled them to bond.

Before my daughter left for the tiyul she made some of the usual Israeli teenage comments like “ayn li koach” (“I have no strength for this.”). She thought they’d get bogged down in too much learning and not enough fun. In addition, she and her friends had already been to many of the sights listed on the itinerary either on school or family trips.

Nevertheless, as I suspected she would, she came home quite excited. Visiting tourist attractions such as the Old City of Jerusalem, Israel’s Supreme Court and the Knesset with teens from different cultures and religions changed the atmosphere, making this trip different from previous ones in several ways. The teenagers heard a variety of speakers including Israel’s Arab Supreme Court Justice and Arab and Druze Knesset Members. At the Menachem Begin Heritage Center they participated in a simulation of the Knesset and played roles as members of the coalition or the opposition. These experiences were eye-opening and thought-provoking.

Giving teens the opportunity to meet and understand, in a personal way, some of the diversity of Israel, as well as members of our extended Jewish American family, furthers tolerance and mutual understanding. During the trip the teenagers participated in meaningful discussions exploring challenges facing Israeli society and how they could contribute to foster positive change. They looked beyond outer labels and voiced their opinions with respect for each other. They learned and became more self-aware through their interaction with youth from other backgrounds. Moran Lazarovitch, the Nahariya teacher who accompanied the Nahariya teens, said,

“The trip encouraged honest and open dialogue about the security situation. The teenagers heard a variety of speakers including a Palestinian and a settler who are friends – each shared his story and how they developed their friendship. They also saw the short documentary Fire Lines about Palestinian firefighters who volunteered to aid the Israelis, alongside other international firefighters, to extinguish the Carmel Fire of 2010. They didn’t know this story and the film really impacted them. The conversations over the four days raised many of the dilemmas and difficulties of our region. It was a challenging and valuable experience.”

As we were unfortunately reminded this summer, it is imperative to encourage initiatives that advance values such as dialogue, learning about and meeting the ‘other’ and peace. Israel’s Education Ministry (in Hebrew) dedicated the new school year, 5776, to “solidarity and personal responsibility.” Moreover, schools were instructed to include lessons on tolerance, the prevention of violence and fighting racism during the first week of school. The need for creative educational opportunities that enable teenagers to interact with a variety of ethnic groups and cultures is clear. Through such programs our youth can gain a different perspective on each other and on Israel, her beauty as well as her challenges. Experiences such as these will benefit them in the future and will hopefully nurture harmony in society as well.