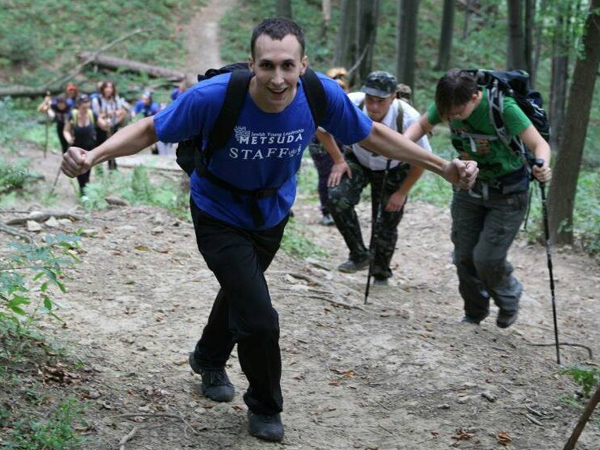 Your support of Federation makes stories like this possible. Thank you.

In late 2014, Nikita Didenko was living a dream. In his small hometown of Alchevsk, in eastern Ukraine, he was a counselor at the local Jewish youth club and a proud graduate of Metsuda, a program of Federation partner agency the American Jewish Joint Distribution Committee (JDC) that develops the next generation of Eastern European Jewish leaders. And he was engaged to the love of his life, a young woman he’d met at JDC’s Hesed social welfare center.

Separatist forces entered Alchevsk with tanks and began robbing stores. When they came dangerously close to his family’s business, reality set in. Nikita knew he had to leave. To save his life, he followed old school friends 500 miles northwest to Kiev, leaving everything else behind—including his fiancée.

“There is a phrase: ‘Life begins where your comfort zone ends,’” he says. “I feel that in my skin. When you lose everything, you realize that you are absolutely free and you begin to live. I lost everything—my house, a stable job, love. But I kept myself.”

Uprooted in Kiev, Nikita sought stability. He moved into the city’s Moishe House, part of a network of Federation-supported homes serving as community hubs for young Jews around the world. There, he not only reengaged his Jewish identity but found his calling in another path of communal responsibility: joining the police force.

“When your country makes it possible for you to change something, it’s foolish for you not to take advantage of it,” he says. Nikita says he’s surprised but happy to see how supportive the average Kiev citizen is of his work. He hopes to help Ukraine forge a positive path forward in the midst of crisis.

Nikita’s journey hasn’t been easy. And with conflict still raging throughout Ukraine, he’s not sure what the future will bring. But Federation-supported programs have helped build in him the confidence and skills he needs to succeed wherever his next step takes him.