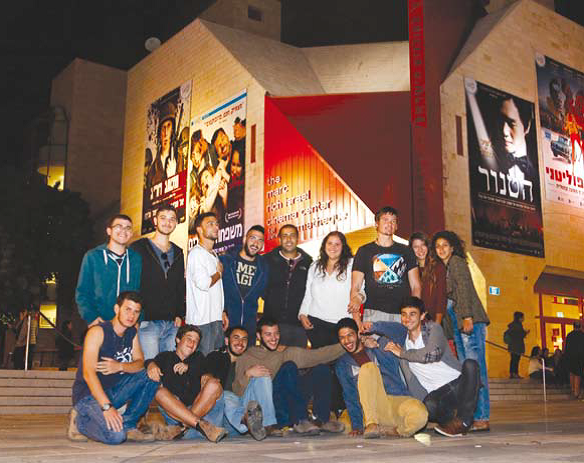 On the last Thursday of October, a wide range of people gathered at the Tel Aviv Cinématèque: teenagers, adults, and seniors. There were a lot of familiar faces and among them, a group of teenagers from Kibbutz Kfar Aza who arrived to watch their own work and the works of others such as films by the Eshkol emergency teams, Eshkol's resilience staff, and pensioners of Kibbutz Ein Hashlosha, Sderot's youth center project, and a youth group from Kibbutz Alumim.

More Than a Thousand Words is the name of a project by the Lahav Association who had joined the Ministry for the Development of the Negev and the Galilee, the trauma coalition and resilience centers at the Sha’ar HaNegev regional council.  The Sha'ar HaNegev Regional Council asked its longstanding partner, the Jewish Federation of San Diego for help in funding the project in Kfar Aza, which it gladly did. Two years ago, the Federation funded Kolnoar, All Included, which is another project through the Lahav Association.

The youth of Kfar Aza presented on screen, a 14-minute film about the struggle for independence and in our local context - independence in relation to remembrance, growth, and maturation. The struggle presented on film, is the hardest of struggles and also the most interesting – it is the struggle with ourselves. What are we doing or not doing to achieve independence or whether we deserve it at all?

Working with Racheli and Boaz of the Lahav group and with Eden, the youth counselor at Kfar Aza, has allowed the youth to touch upon issues which are less talked about at the ages of 16-18. Issues like deeds, volunteering, do's or don'ts, consequences of our choices, community and family, and above all, the importance of a group of close friends.

Shani Kaner, one of the girls starring in the film said:

"We've been living together for 17 years and in the process, we discovered that we can get to know each other even more. We have matured as a group and learned to listen to one another, listen to the wishes of the other and pay attention to what's happening in the group. There was a different atmosphere, it became intimate, and in all this seriousness we had fun together. I had a feeling I could speak and do things. Though I had experience acting in theater classes, I found myself suddenly in a workshop acting for the first time in front of the group and it was very meaningful to me. There was something embarrassing about it and the scene which I play in is based truly on our own lives".

There is an advantage in watching a film more than once. It allows the person who had already watched the film to look at the peoples' faces who haven't watched it yet. I noticed excitement on their faces. I noticed their acknowledgement of their abilities, and I noticed their pride. The youth of Kfar Aza bring an emotional interpretation to the word Team. Even more touching, is that this interpretation could be seen off screen.