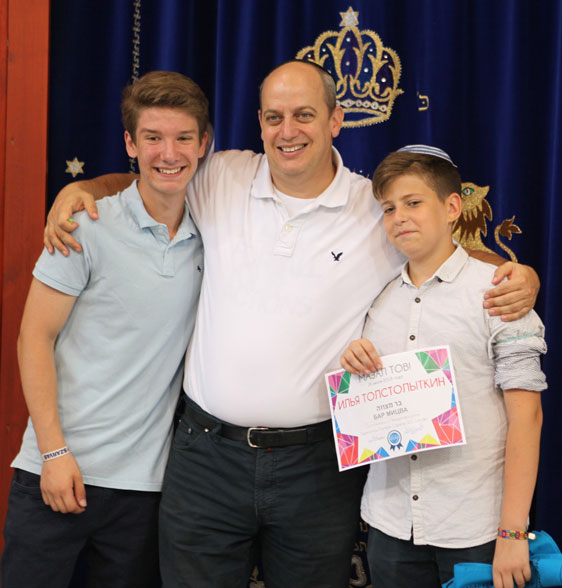 Ilya, right, celebrates his bar mitzvah in July 2018 at Szarvas, the international Jewish summer camp operated by JDC and the Ronald S. Lauder Foundation in Hungary.

The grandson of Hesed social welfare center clients and the son of a Jewish preschool teacher, Ilya Tolstolytkin grew up steeped in his city’s Jewish community.

Kharkov is Ukraine’s second-largest city, with an estimated Jewish community of some 35,000 Jews. It boasts the vibrant JDC-funded Beit Wohl Jewish community center (JCC) and a strong chapter of Active Jewish Teens (AJT), the JDC youth program in partnership with BBYO that reaches 3,100 Jewish teenagers in 57 cities across the former Soviet Union.

But it wasn’t until the 15-year-old left for a summer at Szarvas that he felt intensely connected to not just his city’s or country’s Jewish community, but the global Jewish family.

“It’s so cool to be in a room with so many people from different countries, who are united by one thing: being Jewish,” Ilya said.

Located about two hours from Budapest on the banks of the Koros River in rural Hungary, Szarvas is the international Jewish summer camp founded by JDC and the Ronald S. Lauder Foundation in 1990 that hosts some 1,600 kids from about 30 countries each year.

Ilya first began learning the liturgy at Kharkov’s teen club, where he serves as a madrich, or counselor.

He especially connected with kiddush after a special session on the prayer at an AJT seminar in spring 2017, eventually volunteering to lead the ritual in front of a group of 85 teens.

“The words aren’t that hard to learn. What you should do is just to read it off the sheet at the beginning, and then later it just starts to pop up in your head on its own, and you can easily recite it from memory,” he said. “When I first did it successfully, I felt so happy and excited. Everyone was coming up to me and saying, ‘Cool, wow, that was awesome.’”

As part of the teen club, Ilya organizes the “Happy Birthday” project, which throws community-funded birthday parties for at-risk Kharkov Jewish children and kids from families who live below the poverty line.

“I help kids from poor families because I really enjoy it,” he said. “It makes me feel good in my soul.”

Ilya is also a stalwart AJT participant, waiting each year for the autumn conference that unites hundreds of Jewish teenagers from 10 countries in the former Soviet Union and beyond.

JDC gives teens like Ilya the chance to slowly expand their Jewish networks, first in their cities through their local AJT chapters, then regionally through the annual AJT conference, and finally globally, through the melting pot that is Szarvas, which includes a significant American and Israeli presence each summer.

What sets AJT and Szarvas apart from other Jewish programs is that sense of tapping into a sense of global Jewish connection and camaraderie, he said.

“It’s like family, because we feel comfortable with each other even when we’re speaking other languages, whether that’s Russian, Georgian, Kazakh, or English,” he said. “I was born Jewish, but when I come to AJT, and Szarvas, I consciously choose to live a Jewish life.”