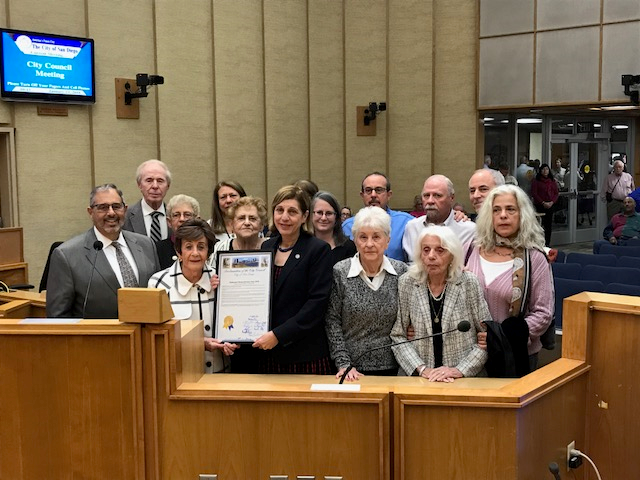 On January 27, 2018, in partnership with Jewish Family Services and the Yom HaShoah Committee, CEO Michael Sonduck accepted the proclamation for Holocaust Remembrance Day; proclaimed by the Mayor and City Council, for and on behalf of the people of San Diego.

Surrounded by city officials, community partners, and Holocaust survivors and their families, survivors Malka Friedenriech Kempner and Rose Schindler met for the first time. Upon meeting, they discovered that they had both been imprisoned in Auschwitz during the same time period. Along with Malka and Rose, survivors Fanny Lebovits, Edith Palkowitz, Manya Wallenfels and Mike Wallenfels were also present for the ceremony.

Michael accepted the proclamation and said, “I want to recognize the organizations in our community that, together, do everything we can to assure that survivors live their lives with dignity and that we never forget this terrible period in the world's history and the lessons we can learn from it.” In addition to recognizing the work of local community rabbis and synagogues, Michael acknowledged the following organizations for all that they do to support survivors and educate the community about the Holocaust: the New Life Club, Jewish Family Services, Lawrence Family Jewish Community Center, Anti-Defamation League, the Jewish Community Foundation, Seacrest Villages, the San Diego Rabbinical Association, and the Butterfly Project.

“Holocaust Remembrance Day offers an opportunity to reflect on the genocide that took the lives of more than six million European Jewish victims and to educate the citizens of the world to prevent this kind of unspeakable tragedy from ever occurring again,” said Council President Pro Tem Barbara Bry. “San Diego is home to many Holocaust survivors, and we are grateful to these individuals for sharing their stories to educate San Diegans about the atrocities of the Holocaust.”

To learn more about our community's work with Holocaust survivors please contact Hedy Dalin at Jewish Family Service by calling 858.637.3210.