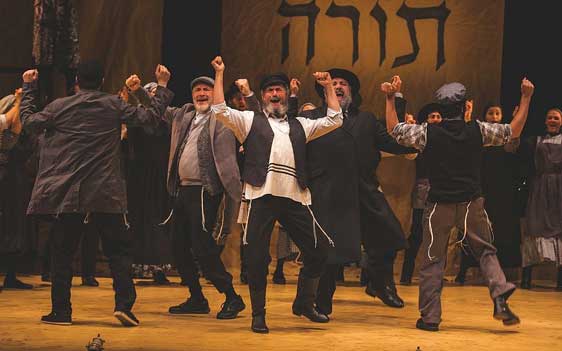 Steven Skybell as Tevye and the ensemble sing 'Tradition' during the National Yiddish Theatre Folksbiene's production of 'Fiddler on the Roof.' (Victor Nechay/ ProperPix.com)

NEW YORK — There are times in life where something seems so obvious you can’t believe it hasn’t happened before. The most recent example for me took place at New York’s Museum of Jewish History, during the National Yiddish Theatre Folksbiene’s production of “Fiddler on the Roof.”The lights dimmed, I turned off my phone and then it hit me: How am I only seeing this now?

In case your memory is rusty, the first number in Jerry Bock’s nostalgia-soaked musical based on Sholem Aleichim’s stories is “Tradition.” Only in the National Yiddish Theatre Folksbiene (NYTF) production, Tevye and the shtetl-dwellers of Anatevke sing “Traditsye.” It couldn’t have sounded more perfect.

To an American Jew whose family made sure to expose him to the arts, sitting through another “Fiddler” is as comfortable as a Passover seder. It is a foundational text. But I’ll admit that I’ve never seen a play in Yiddish before. (Unless you count my grandparents talking to one another “in Jewish” so we kids wouldn’t understand.)

Considering the bittersweet nature of this Diaspora tale — the urtext of the 20th century’s “wandering Jew” — there were moments that felt less like a musical and more like a séance. The suspension of disbelief went far beyond “the stage is reality” to “this auditorium is now a time machine.”

The NYTF and Oscar and Tony-winning director Joel Grey are using Polish-born Israeli actor/linguist Shraga Friedman’s translation of Joseph Stein’s book and Sheldon Harnick’s lyrics created for a 1965 Israeli production. A year after the show’s runaway success on Broadway, this is the Yiddish version’s American debut.

Screens on either side of the proscenium show English (and Russian) captions. However, my familiarity with the text and the emotive quality of the performances meant that I caught myself going for surprisingly long stretches without looking at them. I know this.

There were a few changes. “If I Were A Rich Man” is changed to “Ven Ikh Bin a Rotshild” (“If I Were a Rothschild”), which better fits the song’s meter in the new (old) language, but also resurrects a common phrase from Alecheim’s time (which is still in use in Modern Hebrew today). Don’t worry, “biddy biddy bum” remains untouched.

Watching with many in the same age ballpark as 86-year-old director Grey, Sholem Aleichem’s quintessential Tsarist shtetl seems a little less lost to the mists of time. The story is set in 1905 (just 27 years before Grey was born; suddenly not so old!) and the language cuts through the kitsch of a hundred Hebrew school productions or any Rosie O’Donnell revivals.

But here’s the best part: At many points during the show a character would utter a phrase that wasn’t meant for a laugh, but someone would chuckle, maybe sigh, maybe quietly repeat the phrase back.

Comedian Jackie Hoffman kills as Yente the Matchmaker (and has been chronicling backstage on Twitter) and (not to spoil) gets a moment of Zionist stumping when she declares her intention to (somehow) make it to Eretz Yisroel once the Jews are kicked out of their village. These final moments of the show are even more resonant considering where we are: an auditorium of New York’s “Living Memorial to the Holocaust.”

But no visit to this institution ever ends on a bleak note. (Indeed, in its structural design, the core exhibit concludes with a look out toward the Statue of Liberty, a monument, at least to me, of Jewish perseverance and the immigrant experience.)

The music – all those wonderful songs that have been with us for five decades – continues as the orchestra walks us out. One phrase, a Hebrew one, stays untranslated: L’chaim!

Fiddler on The Roof in Yiddish has had its run extended through September 2. Additionally, several talks are planned throughout the run. (One including actor Austin Pendelton!) More information is available at the Museum of Jewish Heritage’s website.

by Jordan Hoffman, Times of Israel