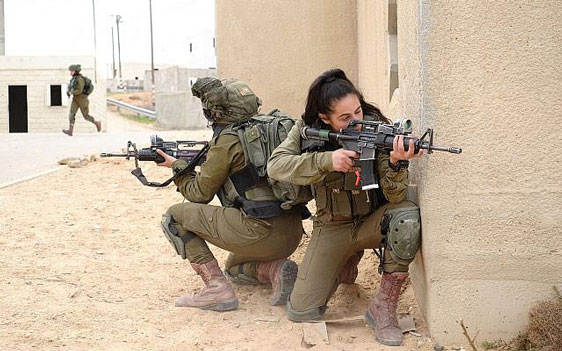 Soldiers from the mixed-gender Lions of the Jordan Valley Battalion take part in an exercise in the Tzeelim army base on February 5, 2018. (Judah Ari Gross/Times of Israel)

Some 1,000 women were inducted into the Israel Defense Forces to serve in combat units this summer, the most to do so in the country’s history.

This new record comes as the military is having female soldiers take on more and more combat roles.

According to military figures, in total 1,050 women joined combat units over the past year, approximately 1,000 of them during the summer, when the army has its draft days for these combat units.

The number of new recruits was also nearly double the total number of female combat soldiers who served in the IDF in 2012 — 547.

“The numbers show the IDF’s operational need for female soldiers. I praise the chief of staff and the army for continuing this trend, especially when other voices have been heard recently,” said Galia Wolloch, the head of the Na’amat women’s group.

“In the past month, another 1,000 female soldiers drafted into field units — an all-time record. Gender equality is good for everyone. A happy recruitment to you all,” Oren tweeted.

The announcement about the record-high female recruitment came a day after the air force said it was appointing its first female commander of a flight squadron: the Nachshon Squadron, which operates surveillance aircraft.

The 34-year-old transport plane pilot, whose name cannot be published for security reasons, will replace the current commander of the squadron in the coming months.

“I’m happy about the appointment,” she said, in a statement from the military. “It is a great privilege along with a great responsibility. The true work is still ahead. I am proud to serve in the Air Force.”

In recent years, the number of female combat soldiers has skyrocketed, nearly quintupling in the span of five years.

Critics of gender integration often decry it as a dangerous social experiment with potential ramifications for national security, while defenders generally trumpet it as a long-needed measure, one that has already been implemented in many Western countries.

Detractors note that some requirements for the female combat soldiers have been lowered — which they say is a sign that effectiveness is being sacrificed — and that servicewomen tend to suffer stress injuries at a higher rate than their male counterparts.

The army insists that it is allowing more women to serve in combat positions out of practical considerations, not due to a social agenda, saying it requires all the woman- and manpower available to it.