As the end of my term approaches (only ONE column left after today), I reflect on the past four years with humility and appreciation. I joke that I am on an Appreciation Tour, letting those who have meant so much to me and the Federation know how much their support, effort and commitment inspires me. Federation is about Community (that’s a big C), and it takes both the Federation to be successful to ensure a strong Jewish Community for years to come AND the donors and volunteers (us) to ensure that the Federation can fulfill its mission to build community, serve those in need and guarantee a perpetual connection to the State of Israel and its residents.
My appreciation extends beyond my tenure as Board Chair. I am lucky. I am lucky to have had parents who never once expressed an expectation of involvement in the Jewish community, but, instead, modeled that behavior with local and national leadership positions to further our people’s causes. I am lucky to be in a position where I could have the honor of leading. I am lucky to have worked with the Federation Board, the Executive/other committees, and the staff, all of whom have an unwavering commitment to the objectives and successes of the Federation, especially in this challenging time of change.  Trust me, it is not easy to be a Federation advocate sometimes, but it’s well worth it!
There is one more group, whose names I will not mention but whose pictures adorn the wall of the Federation board room – the past board chairs. To these people, I cannot express the magnitude of my respect for them, leading and building an organization essential to the Jewish community of San Diego and beyond. I jokingly called them the “alta cockers”, not possessing the foresight that I would soon become one of them. They are the ones on whose shoulders not only the Federation was built, but from whom virtually every Jewish organization in the community benefited. 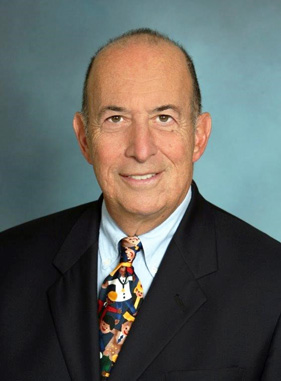 Murray Galinson
But we don’t celebrate the giants of our Jewish Community as we should. We don’t express the gratitude they merit for their life of work that allows us to enjoy the benefits of community and for the care they provided to Jews locally and around the world.  As such, I am thrilled to share that next spring, the Federation will confer its inaugural MURRAY GALINSON AWARD, allowing us to convey our collective appreciation, bestowing the highest honor for volunteer leadership in the Jewish community. And I mean community. This recipient will be someone who demonstrated distinguished service in both the Jewish and secular communities, and who better to name this award after than a man who personifies the criteria by which candidates will be judged. To wit:
a. Length of service to the Jewish community
b. Service to the total Jewish community, as well as its constituent parts
c. Service as a representative of the Jewish community in the organized general community
d. Leadership, character and integrity in communal affairs
e. No standing officer of the Jewish Federation of San Diego County is eligible
Murray is one of those giants that not only dedicated his time, talent and treasure to various organizations in the Jewish community but represented us all with the utmost character in the secular community. We miss Murray and are thrilled to honor him and those who have made such an enduring impact on the Community – true giants. Stay tuned for our first a Murray Galinson Award honoree in 2020.