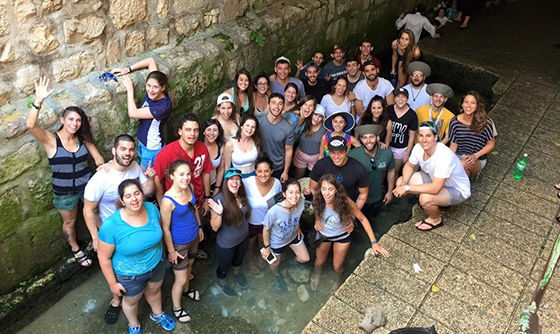 The San Diego Community Birthright trip is a free ten-day journey throughout Israel, available to young adults age 22-26 who currently reside in San Diego. Some participants come from a rich background of Jewish camping and Hebrew school, and some arrive with not one previous Shabbat experience. Some are well travelled; others have never left their state. However, for ten days they are all brought together by a common Jewish heritage and a desire to learn more about themselves, each other, and the Jewish people around the world.  The trip includes elements of tourism, local experience, and educational content that thread Israeli land and history together with modern Jewish identity.

There are many Birthright trips available to Jewish young adults throughout the world, but the San Diego Community trip features some unique aspects, one of which is a visit to our sister city of Sha’ar HaNegev, a region of Israel that our Federation has had a close partnership with for 17 years.

These are hard statistics to hear, and they are even harder to understand. Unless you have travelled the 7,600 miles from San Diego and are standing at the edge of Kibbutz Nahal Oz, looking onto those Gazan houses, and into the faces of the locals who live in the most bombed Kibbutz in Israel. This is where Day 8 of our San Diego Community Birthright trip began.

After a week of touring Israel’s northern mountains, rafting giddily along the Jordan River, experiencing a moving Shabbat in Jerusalem, and camel trekking, the participants finally arrived in Sha’ar HaNegev.

During last summer’s conflict, Operation Protective Edge, this region was literally on the front lines. Tunnels that began in the Gaza strip opened up to the backyards of Kibbutz Nahal Oz. Rockets were fired from less than a mile away, and tanks were lined up in the agricultural fields, effectively turning the region into a military zone. Many families quickly left the area, many of which have made the decision not to return to their homes.

Federation dollars raised in San Diego have helped build bombproof schools and community centers to support secure life in the region. Delegations of teens and adults have travelled to and from Sha’ar Hanegev and San Diego to create people-to-people connections. American families are always invited to experience home hospitality there and see how the spirit of the locals remains unbroken.

It would be an incomplete San Diego Community Birthright trip without a visit to the region that we are so invested in. It would also be incomplete to take young adults on an immersive trip to Israel without affording them the opportunity to create meaningful Jewish experiences. On August 4th, 2015, we set out to combine these two aspects of our trip in an incredible ceremony for fourteen participants who made the decision to become B’nai Mitzvah. 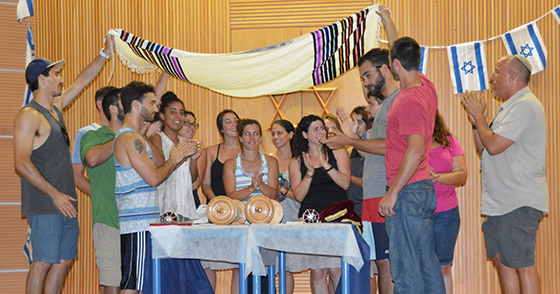 Our ceremony was unique. Fourteen young adults, most of whom have already finished university and none of whom had met before the trip, made the conscious decision and commitment to the Jewish tradition of a Bar or Bat Mitzvah. Our synagogue was the Legacy Heritage Center for Jewish Culture, a high school auditorium built for the people of Sha’ar HaNegev as a result of the partnership with San Diego. Together they reflected on the meaning of becoming a Jewish young adult, and being part of the Jewish family that stretches across oceans and reaches deeper than cultural differences.

Yael Raz Lachyani, Partnership2Gether coordinator for Sha’ar HaNegev-San Diego shared her reflections on the experience. Yael lives in Kibbutz Nahal Oz and hosts many visitors to the region each year.

“When Nicole Patolai had called the night before the visit and said they needed a place to hold a Bar/Bat Mitzvah ceremony, at first I panicked. As Regional Council has a secular nature, Jewish traditions are usually celebrated at different institutions at the different kibbutzim. When Noga Gulst suggested the auditorium at Sha’ar HaNegev High School, I started to realize that the idea was possible.

Up until then, I had been at Bar and Bat Mitzvahs celebrated at the ages of 12-13. When I saw a group of people in their twenties who independently chose to become a Bar or Bat Mitzvah in Israel, and do it in Sha’ar HaNegev High School, it was undoubtedly a unique event.The ceremony was moving and reminded us why we need a synagogue exactly at the center of our region.

This gave me the opportunity to be a part of a unique, exciting experience that connects communities, connects young people to Judaism, and especially connects us to ourselves.”

Registration for Winter Birthright is now open! If you have any questions about the trip or about registering for the San Diego Community Birthright experience through Tlalim-Israel Outdoors, please contact Nicole Patolai at 858.737.7136.