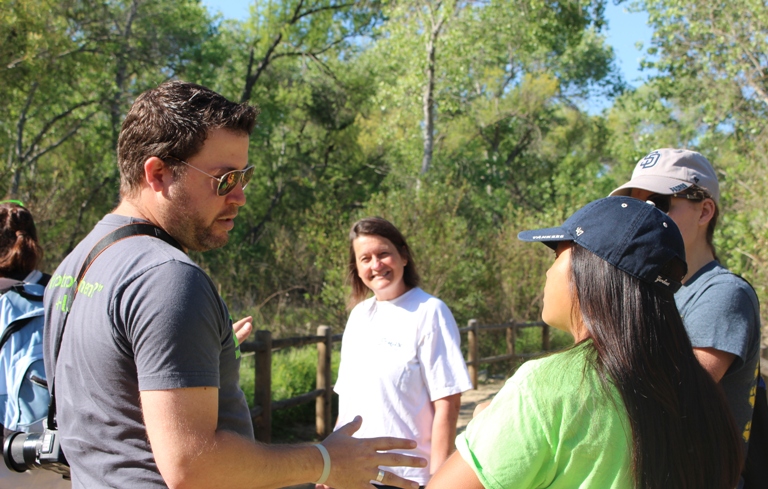 Federation Chief Development Officer (and former Director of the Jewish Teen Initiative), Darren Schwartz, engaging with teens during an event

In the challenging world of heated political rhetoric, gun violence, and #MeToo, examples abound of teens finding and using their voices. For organizations devoted to Jewish teen engagement, empowering teens to authentically shape their own experiences is an important way to increase relevancy and meaning for teens seeking to create change for themselves, and in the world around them.

Communities participating in the Jewish Teen Education and Engagement Funder Collaborative embrace the notion of putting teens in the drivers’ seat. They recognize while this approach may present some very real challenges, it can yield tremendously positive outcomes.

We shared some of these lessons at a recent presentation at Union of Reform Judaism’s Post B’nai Mitzvah Innovators Community of Practice in-Person Gathering for congregations, and we’re pleased to share them more broadly so we all may improve the way we encourage, support and train teens to create rich Jewish experiences, for themselves and for their networks.

Shared here are the experiences of several Funder Collaborative communities, each drawing on outcomes which positively affect the lives of Jewish teens. This outcomes framework creates common links amongst all our endeavors, and is a direct factor in the initiatives to empower teens. Each of the diverse programmatic models offer valuable insights and several are already spreading to other communities.

Three different communities offer a grant pool for new, teen-led programs, and train teens to both administer the funds and to tap into the awards with the purpose of sparking new and innovative Jewish experiences.

Jeff Blumental, Director of the Cincinnati Jewish Teen Collective, which offers Teen Venture Awards grants of up to $5,000, says “the program fuels teens to create experiences for themselves. We emphasize teen-driven programming – we want teens to connect with their own passion and identity, and to think beyond or rethink the community they know.”

To that end, two separate committees review the grant proposals. One, comprised of adults has the responsibility of flagging legal or fiscal issues. Then they are reviewed by a separate, diverse, teen committee. Only the teen committee votes on each proposal. Blumental adds:

“We want teens to have buy-in and support from other teens. These are real decisions being made; it’s not simply slotting a teen into a spot on a larger committee. And teens have awarded funds to projects that adults didn’t necessarily respond to. That is powerful … teens dig into application details and know they’re the decision-makers. For most of their lives that’s actually not the case.”

As part of the Los Angeles Jewish Teen Initiative, the Julie Beren-Platt Teen Innovation Grants Program utilizes adults as community mentors. Jessica Green, VP of Jewish Education and Engagement, explains, “We incorporate a mentors orientation so mentors have tools to support teens creating experiences that come out of their passions. We’ve determined that the process of engaging teens, showing them how they can be involved in community, that their interests can connect to Jewish life – and that adults will support them to do just that—is even more important than any output.”

Some challenges have arisen, including teens’ desire to almost always strive for perfection. Blumental says, “We exist in a culture in society that is striving for perfection; teens are used to applying to places and programs where they have to show their best and perfect selves. We want them to know it’s ok to try and to fail!”

Darren Schwartz, Chief Program Officer of the Jewish Federation of San Diego County and one of the original architects of the San Diego Jewish Teen Initiative, sees other challenges. “Our initiative was originally designed to put teens in charge of approving and administering over $100,000 in microgrants. We learned early through organizations like the Jewish Teen Foundation that training teens in grantmaking is a skill that requires a scaffolding of training, time and developing trust. We hit pause on involving teens in the grantmaking process and decided to focus first on the scaffolding. Through our Peer Leadership Fellows program we have involved teens not only in community planning and fact finding but developed a year’s work of trust and understand. This has laid a strong foundation for involving teens in grantmaking next year.”

“When we think of teen empowerment, we go back to understanding how we treat people, including teens. We have a notion of professionalism that we strive to meet. We need to treat teens as if they are the Board of Directors of the Federation. Pragmatically, this means for each teen meeting there is an agenda; food at events is high quality and served on tablecloths; our communications with teens, while perhaps somewhat different than with older generations, is still professional. Even just having name tents for teens in a meeting sets a tone, changes the dynamic, and changes their attention span. These may seem minor, but when taken together, it all signals a level of seriousness and empowerment. Teens respect that.”

To leverage the camping communities of URJ Eisner and Crane Lake Camps, the URJs Northeast Teen Collective (NETC), an original grantee of the Boston’s Teen Initiative, trains teens to create experiences that will capture the imagination of their less involved friends throughout the year.

“In order to put teens in the driver’s seat effectively, we offer them the framework and tools to achieve what they want in areas about which they are passionate. We’ve found that long-term programs afford teens the necessary time to be creative and ultimately to utilize the tools we teach to be successful,” said Director Emily Messinger. “The onus is on us to position teens for success, and also be aware of limitations simply due to the lack of life experiences anyone at this age has. As a field, we need to support teens and to train them to be the leaders we know they can be.”

“At the Summit, teens pitch their ideas in a Shark-Tank style program. This is a deeply impactful and important experience for teens. It offers them the space to clarify their ideas and visions and to voice their passions. And they do this all with funders in the room looking to support them,” said Messinger.

She has observed both genuine successes and unintended benefits. Since 2015, almost 100 pop-ups have engaged 600 teens outside of summer camp, from Shabbat dinners to social action campaigns featuring gender neutral bracelets. Often teens ask their parents to chaperone events or help in other ways, offering an unexpected and effective inter-generational component.

To answer the question: how can we overcome the real barrier to engagement? Boston looked to debunk assumptions. A common misconception is that teens don’t engage because “programs aren’t good enough and/or the teens are just too busy” explains Adam Smith of Jewish Teen Initiative of Greater Boston (JTI). Instead, teen surveys show that teens do not attend events because they “didn’t know about it, no one invited them, they didn’t think their friends would be there, or they felt ‘I’m not that Jewish.’” It was the teens’ response which informed the peer leaders model, currently deployed in Boston and San Diego and rolling out in additional communities. Smith explains important nuances:

“We don’t ask teens to ‘recruit’ other teens. That creates an ‘in-group’ and ‘out-group’ dynamic that creates tension. Instead, we train teens to be ‘peer connectors.’ We train them in community organizing and relational connecting.

The approach draws on Hillel’s Senior Jewish Educator/Community Entrepreneur Intern model, and Hillel itself trained teens in Boston in skills critical to connecting their peers, such as:

A key ingredient is the recruitment of diverse teens with varied interests. Peer Leaders each receive a $500 annual stipend and must reach targets for conversations and interaction.

Schwartz adds, “Teens learn how to do relationship-based engagement; they understand how to leverage a network and to reach outside of their own network. They are empowered to find out what compels their peers to engage – or to not engage – and then teens want to create the change that will lead to more engagement.”

During Boston’s pilot year, 14 teens connected with 400 total teens, including 150 new teens who were not previously connected to any organization. In year two, peer leaders offered JTI feedback about gaps in programming. Smith said, “Teens are on the ground hearing from their peers what they want. If our community isn’t offering a certain experience, then we can absolutely explore supporting it.”

Darren Schwartz sums it up: “What permeates all that we do is a teen’s message – ‘don’t do anything about me, without me.’”

These diverse models empower teens authentically, and in ways which may feel challenging to adults. The common link is trusting the teens, enabling them to create Jewish experiences for themselves and their peers.

“Adults need to understand teens today – they are the experts about what is meaningful for them. For the most part, teens are looking to engage in Jewish life in different ways than their parents do,” explains Jessica Green. “That’s more than ok. That’s a reality we are embracing.”

By Sara Allen, Director of the Jewish Teen Education and Engagement Funder Collaborative