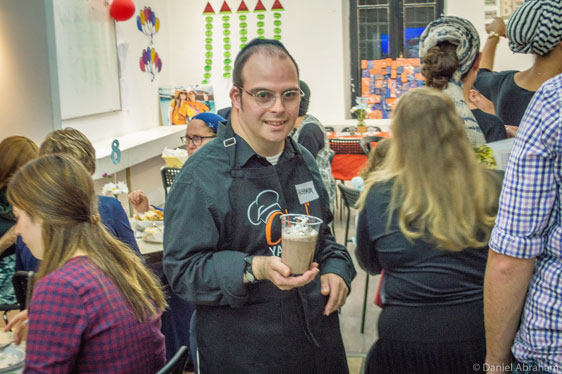 (JNS) It only happens once a month, so you’ll want to mark your calendar well in advance. Because, like with other classy German Colony restaurants, you’re better off making a reservation if you don’t want to be left outside in the Jerusalem cold, staring ravenously at the happy diners inside.

But if do find yourself gazing through the window at the Yachad Cafe, you’ll quickly notice something very different from other fine dining establishments. In such eateries, the wait staff swoops down, pad in hand, and efficiently takes your order before moving on to the next table.

Whereas here at Yachad (in Hebrew meaning “together,” “in unity”), your servers are much more likely to introduce themselves and share a thought or two, even if it’s just that they’re happy you came out to see them and eat the food they’ve been working so hard to make for you.

And another thing about the Yachad Cafe, despite the hustle-bustle of the city outside, no one here seems to be in a hurry.

Because the clientele don’t come just for the delectable food (and it is good), but because they’re eager to support these young people with disabilities as they work hard to learn a trade and be empowered to proudly support themselves someday.

It’s been seven years since Yachad, a program of the Orthodox Union (OU), opened a chapter in Israel (joining the dozens of chapters across the United States and Canada) and they’ve been hosting all manner of programs for families who have a child with disabilities, including get-togethers, holiday celebrations, trips and community Shabbatons across the country.

But during that time, they kept hearing from families whose special-needs children had finished school (at age 21 in Israel) and needed a next step in preparing to meet the world.

So a year ago, Yachad opened the doors to a vocational training center in Jerusalem’s German Colony, a full-time program to give young adults with special needs from English-speaking homes a chance to learn the skills – and grow in the confidence – needed to maximize their chances of independence in the future.

That Includes working on every detail that goes into running a cafe.

Keeping the flow of diners moving at a good clip was the goal of the maître d’ on a recent evening, Yoel Sterman, whose day job is the director of the Israel Yachad program.

On the other 29 days of the year, Sterman reports, this restaurant – replete with cloth tablecloths, fresh flowers, cool background jazz and a menu of soup, salad, fish and pasta – is a workplace-skills classroom. The training center gets its main support from the OU, with private donations, family contributions and a handful of volunteers also key to operations here, as are the diners who come out each month to give the program (and the members) a boost both in morale and money.

“The entire idea is inclusion,” says Sterman. This inclusion, he adds, works both ways: The person with disabilities is included in the world, and the person who comes out to support Yachad is including the person with disabilities in their minds and hearts as an individual they can relate to. Among the skills they learn: how workplace settings require a behavioral code a bit more businesslike than social settings do.

“It’s a great time,” Jerusalem resident Alan Novetsky said with a grin. “And it’s a great cause.”

Food service – from menu design to cooking, from serving to cleaning up – is just one of the skill sets Yachad teaches in its vocational training program here. Indeed, from 9 until 3, five days a week, the 15 members learn everything from elder care to retail sales, from customer service to child care. In addition, members visit a different workplace each week that to date has included a clothing store, a memory loss residence and a high-tech shop, to explore what it’s like to work in these environments.

Among the diners that evening was Rabbi Avi Berman, executive director of OU Israel. Whenever he’s in the country, he can be counted on to come out for the monthly cafe. And sometimes he brings along OU supporters “because on those nights, you get to see an unbelievable amount of love and care between all kinds of Jews, where someone shows up just to help another Jew feel like more of a mensch,” he says. “I only wish my brother-in-law with disabilities had had Yachad when he was growing up.”

Wearing his OU kipah, Rabbi Berman says Yachad is “an important investment. Here in Israel, it gives these wonderful human beings who are living here but still part of Anglo culture a place where they feel welcome. And now they have this incredible opportunity for vocational training to help them stand on their own feet and feel they are accomplishing something.”

Nowhere is the value of this project more obvious than at home. “Exciting and hopeful” is how Atara Reichel describes the change in her 23-year-old daughter, Yaera, who lives with developmental delays and communications challenges. “Instead of shyly sitting on the sidelines, she’s getting involved and wanting to help,” she says.

In the last year, Reichel reports that Yaera has blossomed in self-confidence and openness to new experiences: “The positive feedback has pushed her outside her comfort zone.”

But although this Jerusalem mom (the family made aliyah from New York in 2004) had heard about her daughter’s progress, she notes that “seeing it that night with my own eyes meant everything to me.”

Next up for the vocational program is getting these young adults into internships, where they can try out their new job skills under the watchful eye of a job coach. So far, two of the members are already interning, with more in the works.

“We think of the center as filling a real need as a transitional program that can take them from school to feeling that they have a place in the world,” says the vocational center’s director Lisa Galinsky. “We think of it as a university for learning the kinds of skills they’ll need in the future.”

The cafe is clearly a key part of that vision, as members greet each diner the moment they walk through the door. “It’s a pleasure to be able to support this organization,” said Jack Cadrandl of Jerusalem, heading out after dinner. “All of them are incredibly warm and friendly.”

“I like the people,” says member Yitzchak Friedman, whose hearing aid makes it possible to understand his customer’s dinner orders. “I like it when they are deciding what to eat.”

While on the other side of the room, Elazar Ben-Dov cups a small diner’s chin in his hand. “That’s a cute baby,” he says with a mile-wide smile as the mother beams. “That’s a really cute baby.”

The evening, organizers report, was a solid success – its 4,000-shekel profit destined for the Yachad Vocational Scholarship Fund. But the cafe’s bigger success is harder to quantify.

“I loved bringing people their food,” said member Shimmy Cohen the next day. “Because I loved making them happy.”

The next Yachad Cafe is set on Feb. 18, for 5 p.m. to 9 p.m., at the Yachad Israel Inclusion Center, 64 Emek Rafayim, Jerusalem. To reserve your table, email atkina@ou.org or call 02-656-8048. For more information on Yachad’s Israel programs, visit www.yachad.org/israel.