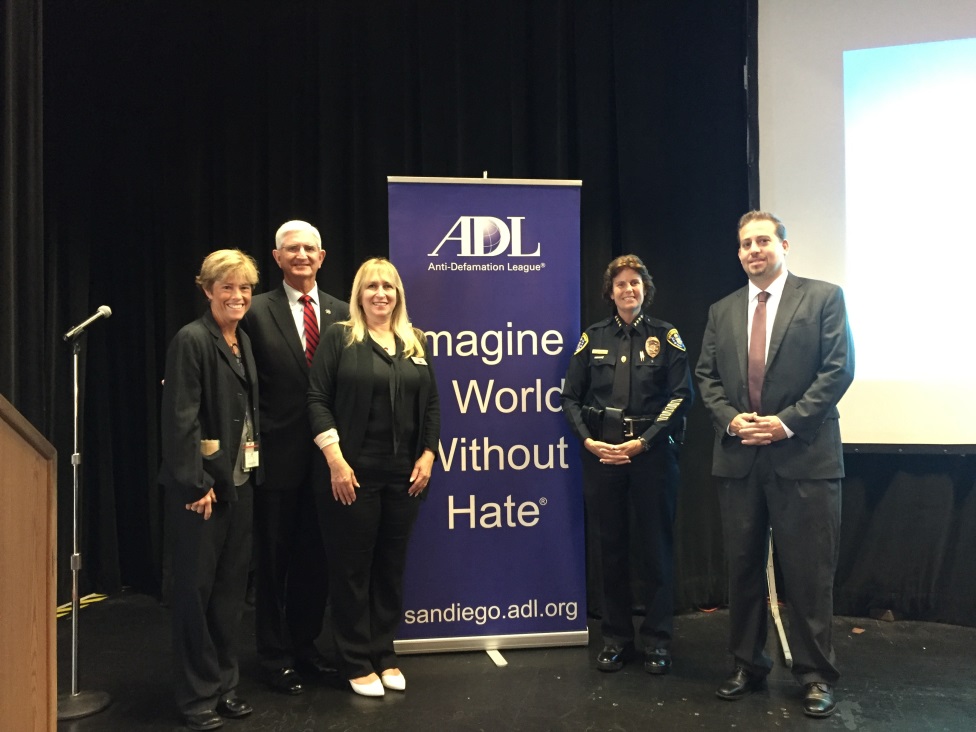 The Anti-Defamation League of San Diego spearheaded a counter-terrorism training reaching over 300 local, state and federal law enforcement personnel throughout San Diego and Southern California on August 17, 2016. The training, entitled “California Radicalization: Homegrown Islamic Extremism in Our Backyard,” was presented in coordination with the Office of Homeland Security and the San Diego Police Department, and was co-sponsored by almost all of San Diego’s law enforcement agencies.

The message from San Diego’s top law enforcement officials was consistent: law enforcement agencies, NGOs, and the private sector need to all work together to combat the ever-more present threat of extremism. And as was witnessed by the large turnout and many participating partners, the San Diego community serves as a model for this type of inter-agency collaboration.

Oren Segal, ADL’s Director of the Center on Extremism, began the training by delving into the propaganda and different marketing strategies used by terrorist groups like ISIS and Al Qaeda to influence people around the world. His analysis of the Americans that have been radicalized over the last few years demonstrated that radicalized people can come from all backgrounds, no matter the color of their skin, their religious affiliation, their social standing, or their socioeconomic status. He further went on to explain how there are times when removing terrorist content from online platforms is the appropriate path to take, and how other times there is more benefit to be had from leaving terrorist content online in order to glean intelligence from those channels that can be used against the terrorist groups and individuals. Mr. Segal’s presentation was rich with case studies and statistical analyses that demonstrated the overarching trends of Islamic radicalization in Western societies.

Next, FBI Special Agent David Cotter and Homeland Security Investigation Special Agent Daniel Duff took the audience on a journey through the Syrian civil war as they recreated the timeline of Mohamad Saeed Kodaimati’s departure from the United States to join the fighting in Syria with designated terrorist groups, before ultimately coming back to San Diego to be apprehended by government agents. The case study provided fascinating insight into the efforts and requirements needed to identify and build a case against terrorist operatives, and the inner-workings of the systems that are in place to keep the homeland safe against terrorist threats.

The final segment of the training was presented by San Bernadino Police Department Assistant Chief Eric McBride, who provided a comprehensive debriefing to the law enforcement personnel in attendance of the operational lessons learned from the San Bernadino terrorist attack. The presentation included actual recordings from the attack from both victims and officers and gave the audience a window into how the attack unfolded, what the police response looked like, what were the challenges that they faced, where did they succeed, and what were the takeaways that departments around the country should know to prepare for in case of such incidents. The first-hand information was invaluable for those in attendance.

ADL is the foremost NGO trainer of law enforcement in the country, with over 14,000 law enforcement personnel trained each year. With terrorist attacks and extremism seemingly becoming more frequent around the world, ADL’s efforts to combat hate through government, law enforcement, education, interfaith, security and other initiatives and programs are as crucial as ever.