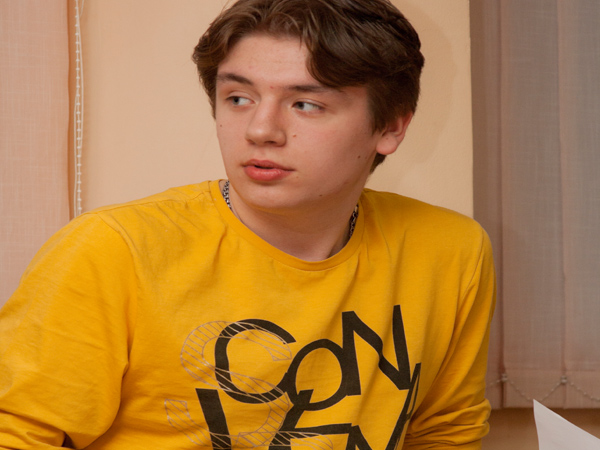 Michael Novick, Executive Director of Strategic Development at the American Jewish Joint Distribution Committee (JDC), met recently with Federation’s Israel Steering Committee to discuss JDC’s past and present work in Israel and how to address Israel’s most critical social challenges.

For more than 65 years the Jewish Federation of San Diego County has worked hand-in-hand with the JDC in Israel and around the world to support Jews when they are most in need.  At risk youths is a growing issue in Israel and JDC helped create a new program, “School with a Heart — Yuval” program for underachieving students – much like Tom’s story below – which began working in public schools last year.

To the adults at Tom’s school in Haifa, it seemed that the seventh grader wanted to disappear.

At a meeting with a coordinator for a new program, Tom hid his face and spoke quietly. It was obvious he carried some deep emotional wounds that were affecting his behavior and his relationships and causing him to underachieve in school.

But those same traits made Tom the ideal candidate for that very program, School with a Heart-Yuval, which offers underachieving students throughout Israel an extra boost.

The partnership between Federation and the JDC, Israel’s Ministry of Education and the nonprofit Yuvalim, School with a Heart-Yuval takes a comprehensive approach to helping students falling through the cracks by offering remedial classes, enrichment, therapeutic support and teacher training.

“Our goal is to ensure that the students who need emotional and learning assistance receive in-school support, and that their parents are brought into the process as well,” says Michal Ettinger, head of children’s programs at JDC.

For Tom, School with a Heart-Yuval gave him a safe and relaxed environment complete with extra enrichment and therapeutic activities. As Tom’s coordinator built a close relationship with him during one-on-one sessions, she realized the root of the young student’s problems: a difficult home life that required him to act as a parental figure to his siblings, preventing him from studying.

Leaving the Baggage Behind

The ensuing school year was not easy.

“There were times Tom tested the limits of the entire staff,” his coordinator says. But little by little, he made progress. After months of work, “he now speaks with more confidence and he has built meaningful friendships.”

By the last day of school, the young man who wanted to disappear stood on stage before his entire school, visiting dignitaries and even the mayor of Haifa to play a major role in the end-of-year ceremony.

Far from an act, his performance was symbolic of how much Tom had transformed over the course of the year—and of how much more of his potential he can reach in eighth grade.

To learn more about The Federation’s work in Israel, please visit http://jewishinsandiego.org/israel