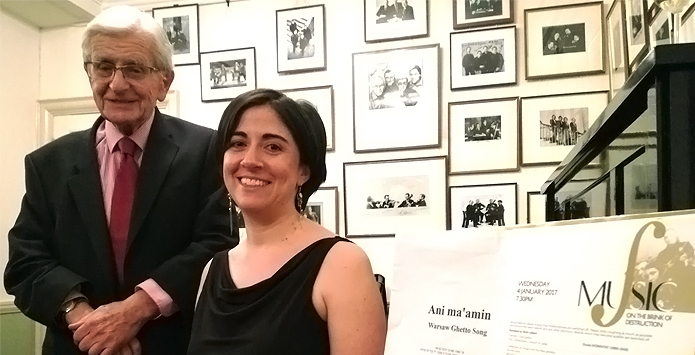 The £100,000 ORT Marks Fellowship Programme will fund 20 post-graduate students’ work on the subject over 10 years.

Not only will they research this largely overlooked aspect of the Holocaust they will also add new content to World ORT’s Music and the Holocaust website and discuss the topic at schools and colleges.

“This is the most robust and secure way to carry forward World ORT’s pioneering Music and the Holocaust website,” said philanthropist Clive Marks OBE. “Younger scholars are best placed to synthesize new scholarship and be enthusiastic ambassadors. And their contributions to the website will maintain its relevance over time.”

To find out more about sponsoring a fellowship email ortmarksfellowships@gmail.com.

The fellowship programme was announced at the Wigmore Hall by Trudy Gold, Editor in Chief of the educational resource Understanding the Holocaust and former Chief Executive of the London Jewish Cultural Centre.

Dr Shirli Gilbert, Karten Associate Professor at the University of Southampton’s Department of History, told the capacity audience: “The archive of Holocaust music is vast, and it’s still growing, thanks to initiatives such as these fellowships. The next, perhaps even more important, task, is for us to continue the work of recovering this musical world, and bringing it to wide audiences – at our commemoration ceremonies, in our choirs, in our classrooms – as a way of giving voice to the victims, and allowing these documents from the time to stand as monuments to the lives that were destroyed.”

Mr Marks, who has lectured over four decades on the subject of music in the Third Reich and who chaired the London College of Music for 15 years, is the driving force behind World ORT’s Music and Holocaust website. Dr Gilbert, author of the critically acclaimed Music in the Holocaust: Confronting Life in the Nazi Ghettos and Camps, curates the website’s content.

Since its founding in 2008, Music and the Holocaust has more than doubled in size and dwarfs similarly themed online content offered by Yad Vashem and the United States Holocaust Memorial Museum. With an average 16,000 visits per month, the website is “one of the most significant sources of information for music during the Holocaust” according to Dr Lawrence Sherr, Professor of Music at Kennesaw State University.

The Wigmore Hall concert showcased some of this extraordinary musical archive. There were well-known works, such as Dmitry Pokrass’s “Partisan Song”, and some newly-unearthed pieces receiving their British premiere. Most of the featured works’ composers perished during the war.

“What might the world of twentieth century composition have looked like, were it not for the violent destruction of an entire generation of promising young composers?” Dr Gilbert said.

The quality of the music, as well as the importance of the theme, compelled renowned cellist Gemma Rosefield to perform in the concert.

“This subject is very close to my heart: I wrote my thesis on music from Theresienstadt, I had family in Poland during the war and music is my passion. But this music stands on its own merits regardless of the dire circumstances in which it was written and originally performed; it is great music in its own right,” Ms Rosefield said. “It’s incredible that these works, which were only recently discovered, are becoming part of the chamber music repertoire and ones that we performed that are lesser known will, hopefully, join them.”