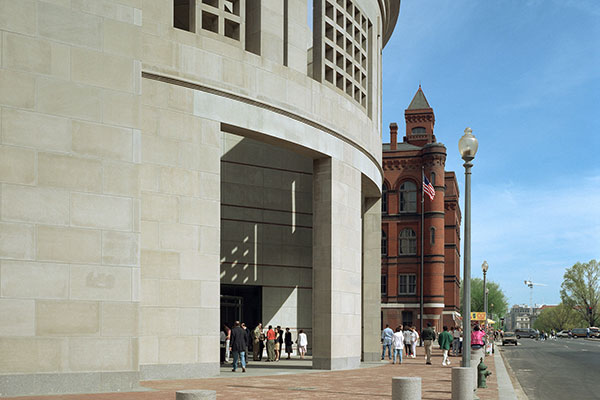 The Holocaust Memorial Museum is located on the National Mall in Washington DC.

I started an awesome new job at the beginning of this year: I’m a social media producer for the United States Holocaust Memorial Museum in D.C.

I know, it doesn’t necessarily sound awesome in the typical sense. Usually, when I tell people where I work, they respond with something less like “Cool!” and more like, “Oh wow, I went there in eighth grade and it was really sad.” And, yes — of course — it’s sad. I work with stories from the Holocaust all day, every day. But that’s also why I love my job so much. Each morning, I come into work and learn something new that either shakes me up or makes me believe in humanity again. Shall I give some examples? It’s time for a listicle.

1. Interacting with Holocaust survivors is unreal.

There are about 70 Holocaust survivors who volunteer their time at the museum — whether it’s staffing the Donor Desk in the Hall of Witness or telling their personal stories in our First Person series.

Honestly, any opportunity I get to interact with the survivors is a highlight of my day — they’re each incredible. I got to meet a new volunteer on her first day with us, and after I explained what I did for the museum and that I was new too, she looked at me and said, “I’m going to tell you something I don’t normally talk about.”

She described fleeing Nazi Germany on the last day that Jews were allowed to have passports. Her family had managed to get visas for the Dominican Republic, but it was still difficult for them to leave—a Nazi official watched them pack their bags to make sure they didn’t bring anything of value with them, and then they were searched again as their train crossed the border with France. Still, her older brother somehow managed to smuggle her father’s ring, a treasured family heirloom, past all the checkpoints. Her father was furious when he found out: if he’d been discovered, the entire family would have been severely punished. But, miraculously, the ring remained a secret until they were all safely out of Germany. It was clearly a very scary moment for her to recall, but I was so grateful that she shared it with me.

A few weeks later at my new employee orientation, a woman who survived Auschwitz as a teenager told me, “I’m so happy that good people like you care about what happened to me,” and I’m pretty sure that was the moment I peaked as a human being.

2. All kinds of people visit the museum — and that’s a good thing.

I’ll never forget this: It was a few weeks before I started work, and I stopped by the museum to have my ID badge made. I walked out of the building in the best mood, thinking about how amazing my new job was going to be and all the important things I’d do, only to bump into a pack of young men on their way into the museum. One of them was wearing a shirt with Jimmy Kimmel’s face on it, surrounded by the words, “SCHUMER’S B***H.”

I was furious. How could someone walk into the Holocaust Museum with that shirt on? I called my boyfriend to vent while I walked home, and he reminded me, “Well, don’t you think that’s exactly the kind of person who needs to see the Holocaust Museum?” It shut me up pretty quick.

In the five months I’ve been at the museum, I can’t tell you how many times I’ve heard the reminder, “We’re a public institution.” Regardless of their views, anyone can come here. And I think everyone should come here.

3. There are always new and infuriating things to learn about Nazis.

For example, did you know that Joseph Goebbels, the propaganda minister who helped convince an entire country that disabled people were “life unworthy of life,” had a clubfoot and walked with a limp? The hypocrisy knew no bounds. Sometimes I have to get up from my desk and walk around because I get so steamed reading about these people. I’ve always known that Nazis are very bad, obviously, but every little detail I pick up puts their atrocities in sharper perspective.

4. We aren’t just a history museum.

I didn’t know this until I started working here, but preserving history is only part of the museum’s mission to be a “living memorial” to the Holocaust. The Simon-Skjodt Center for the Prevention of Genocide studies and identifies areas where crimes against humanity and acts of genocide could occur. Some of the work CPG is doing right now includes the Rohingya people in Myanmar and the tense political situation in Mali. After all, there’s no point in learning our history if we don’t apply it to what’s currently happening right now.

5. Self-care is not optional.

Working at the Holocaust Museum can get heavy. I spend a lot of my time digging through the archives, and there have been moments when I’ve stumbled across something that ruined my entire day.

More than any job I’ve ever had, I have to pay attention to how I’m feeling and take breaks when I need them. If I read something really upsetting or accidentally watch some footage I didn’t want to see, I make sure to go outside and get some sunshine on my face to clear my head. I also eliminated my history channel binges at home.

And, since I have an anxiety disorder, I make extra-double-sure to take my medication every day.

6. And finally: Hitler had both testicles, and he also wasn’t ~secretly Jewish~.

There are a lot of popular rumors about Hitler having a “shocking secret” that fueled his aggression, and I’ve heard all of them. I’m afraid he was just an anti-Semite in high-waisted pants.

By Abbey Hartley for Alma