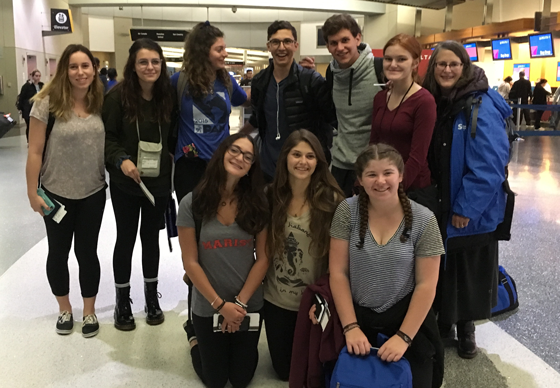 Through your generosity, Federation sends hundreds of young adults annually to experience our Jewish world firsthand. Here is Eitan's story from his recent trip with March of the Living.

I could never imagine myself walking down the tracks of Auschwitz-Birkenau and experiencing the horror that my Grandfather did so many years ago, watching as his family marched towards death. On the contrary, I am sure that he could have never imagined thousands of Jewish teenagers from around the world, including his own grandson, marching down the same tracks, towards freedom.

Yesterday, we mourned the tragedies of the death camp. We couldn’t fathom enduring years of horror in such a hellish environment, as brutal weather conditions rained down on us and tears rained down our faces. Today, however, the sun shined bright through the clouds like the smiles on our faces. Being so happy in a place that once contained so much sorrow ironically made me prouder than I have ever been in my life. My grandfather tirelessly spent his life fighting to ensure a Jewish future for his family. He fought for his life, and he fought for his people. All day, I could only imagine how he, or any victim of the holocaust, would feel to witness such an event like The March and to see their children so happy in a place they were once forced to be so miserable.

To me, marching down these tracks as a proud Jew meant one thing. It meant that we, the Jewish people, had won. This was the revenge my Grandparents could only dream of. This embodied the hope and the strength of the Jewish people. Never have I ever been so proud to be a Jew and never have I understood on such a level how important it is to keep moving forward and never give up on my faith.

We walked in and out of the camps as free and proud Jews, and never will we ever let anyone take that away from us ever again.